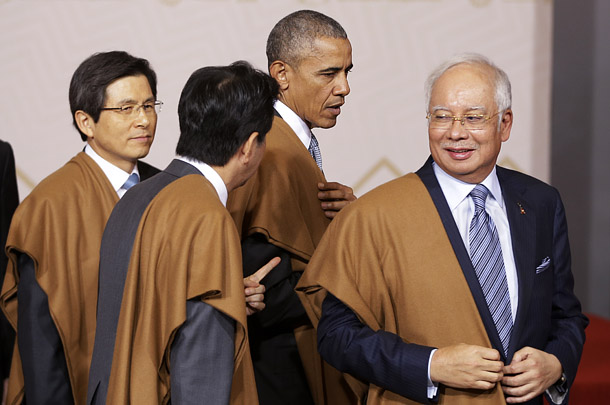 Opposition lawmakers on Monday moved to start a process to impeach President Park Geun-hye, following the prosecution’s announcement that she will be investigated as a co-conspirator in the massive influence-peddling scandal involving her friend and associates.

The main opposition Minjoo Party of Korea formally adopted a stance on Monday that it will push forward the presidential impeachment and create an in-house organ to start the process. The decision was approved unanimously at the general assembly of its lawmakers.

“Impeachment could take as long as six months, and the country will suffer enormously during this long process,” Chairwoman Choo Mi-ae of the Minjoo Party said. “The National Assembly’s passage of a motion to impeach Park relies on the conscience of the ruling Saenuri Party lawmakers who are not loyal to Park.”

The Minjoo lawmakers, however, have yet to decide when to start the process. They said they will continue to discuss the issue.

Earlier in the morning, the People’s Party, the third largest political power in the National Assembly, also adopted an official stance that Park must be impeached. The Justice Party also said it supports the move.

The prosecution announced Sunday its interim findings of the special investigation into Choi Soon-sil, Park’s longtime friend; An Chong-bum, former senior presidential secretary for policy coordination; and Jeong Ho-seong, Park’s former personal secretary for 18 years. Choi and An were indicted on charges of coercing 53 companies to donate 77.4 billion won ($65.76 million) to two nonprofit organizations and embezzling the money. Jeong was prosecuted on charges of leaking confidential information to Choi that was obtained during his public duty.

The prosecution said it concluded that Park colluded with Choi, An and Jeong for most parts of their crimes, but could not indict the president because of the immunity afforded her as stipulated in the Constitution.

Following the announcement, liberal political heavyweights, including presidential contenders from the opposition parties, urged the National Assembly on Sunday to start the impeachment process, while pressuring Park at the same time to voluntarily resign. Park, through her spokesman and lawyer, made it clear that she will not cooperate with the prosecution’s probe, questioning her own prosecutors’ political neutrality. She also dared the lawmakers to impeach her by saying she prefers settling the situation through legal means.

Rep. Kim Young-joo, a member of the Minjoo Supreme Council, said there is enough ground to impeach Park. “The prosecution stated the president’s charges in the indictment papers,” Kim said Monday morning. “The National Assembly has no choice but to begin the impeachment process under the Article 65 of the Constitution.”

According to the article, the National Assembly is granted the right to pass a motion for impeachment in case the president has violated the Constitution or other laws in the performance of official duties. The People’s Party said it will start a campaign to gather the necessary votes to impeach Park.

“In order to secure the more than 200 votes required to pass the presidential impeachment motion [at the National Assembly], we will consult not only the two opposition parties but also Park's adversaries in the Saenuri Party,” said Rep. Lee Yong-ho, the People’s Party floor leader. “We also urge the prosecution to investigate Park using its power to issue a travel ban and search and seizure.”

Justice Party Chairwoman Sim Sang-jeung said the three opposition leaders must meet as soon as possible to discuss their alliance during the impeachment process. “This is a critical juncture, and there is no room for a slight mistake,” she said.

Although the opposition parties decided to impeach Park, a series of hurdles are still in front of them. “We need perfect preparation to succeed,” Choo said. “Considering the long and extremely difficult process, the best resolution is still Park’s voluntary resignation.”

A presidential impeachment requires a two-thirds vote by the 300-member National Assembly. As of now, the three opposition parties and liberal independents occupy 171 seats. Support from Saenuri rebels are crucial to pass the motion. Rep. Woo Sang-ho, Minjoo floor leader, said the motion will be submitted “when its passage is clearly guaranteed.”

Some Saenuri lawmakers - more than enough to pass the motion in cooperation with the opposition parties - expressed their support for the presidential impeachment. The Munhwa Ilbo conducted a survey Sunday and Monday after the prosecution’s announcement with the 129 lawmakers of the Saenuri Party and 65 responded. Among them, 31 said they will vote for an impeachment motion, while 26 deferred their decisions. Only eight said they disagree with it. If the National Assembly passes a motion to impeach the president, Park’s power will immediately be suspended, while the prime minister will then oversee state affairs as acting president. The Constitutional Court will then deliberate the legality of the impeachment in a process that can take up to six months. Of the nine justices of the court, six must support the impeachment.

Meanwhile, the Blue House said the cabinet meeting, scheduled for today, will be hosted by deputy prime minister for economy Yoo Il-ho. Park will not attend the meeting, and Prime Minister Hwang Kyo-ahn, currently in Peru to attend the APEC summit, will return later in the day.

The cabinet is scheduled to review and approve a plan to appoint an independent counsel to investigate the Park-Choi scandal. The National Assembly passed the bill on Thursday, giving the two main opposition parties the right to recommend special prosecutor candidates whom Park must choose from.

Presidential spokesman Jung Young-kuk rejected Monday the possibility that Park will veto the bill. “The president clearly said she will accept it,” he said, referring to Park’s second apology issued earlier this month. “If necessary, I will also faithfully submit to the prosecution’s investigation, and I will also accept an independent counsel investigation,” Park said. She, however, is now refusing to cooperate with the prosecutors’ probe.