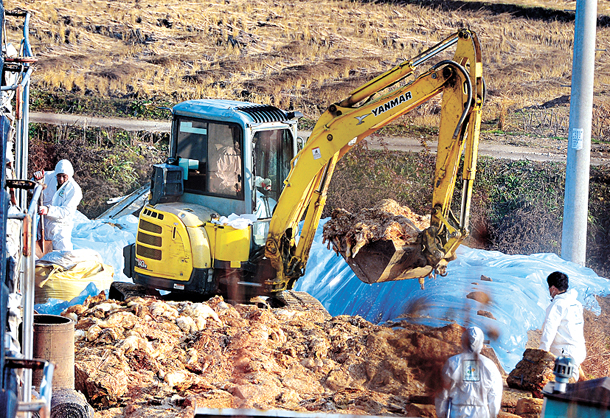 Quarantine officials cull thousands of ducks at a farm in Eumseong County, North Chungcheong, on Monday after it was found to contain the highly pathogenic H5N6 avian influenza virus, the first such case in Korea. [KIM SEONG-TAE]

Local health authorities confirmed Korea’s first outbreak of the highly pathogenic H5N6 avian influenza virus in rural areas and vowed to ramp up measures to control the disease, which has so far infected 15 people and killed nine in China since 2014.

Kim Yong-sang, head of the Animal Health Management Division of the Ministry of Agriculture, Food and Rural Affairs, said Monday that the ministry requested the Korean Centers for Disease Control & Prevention to check whether the virus found in Korea could affect humans like it did in China.

So far, they have found a “very low chance” that it can, Kim said, because authorities have culled all infected animals and stepped up quarantine measures in farms across the nation.

It appears that migratory birds have been the main cause of the spread.

Korea’s first case of the H5N6 strain of the virus was discovered on Oct. 28 in Cheonan, South Chungcheong, in the feces of migratory birds. The same strain was found on Nov. 10 on the banks of the Mangyeong River in Iksan, North Jeolla.

Last Wednesday, a duck farm in Eumseong County, North Chungcheong, was confirmed to have been affected by the virus, while another farm in Haenam County, South Jeolla, where 2,000 chickens died a day earlier, was confirmed with the same result as well.

Quarantine authorities in North Chungcheong dispatched a team of officials to the Eumseong farm and culled 26,000 ducks.

Within 1.2 kilometers (0.7 miles) of the area, the virus was detected in four other farms on Friday and two more on Saturday.

Last Friday, 21,700 ducks at a farm in Muan County, South Jeolla, were culled after it was confirmed the farm was hit by the virus.

On Monday, a farmer in Gimje, North Jeolla, reported that 100 ducks on his farm suddenly died, prompting government officials to investigate whether it was due to the bird flu; 17,000 ducks on the farm will be culled as part of a safety precaution.

On Sunday, 8,500 ducks were culled in a farm in Cheongju, North Chungcheong, about 20 kilometers away from the Eumseong farm where 26,000 ducks were slaughtered.

No human-to-human transmissions have been discovered so far.

The closest that the disease may have come to the capital so far is in Yangju, Gyeonggi, just north of Seoul, when a farmer reported that at least 240 out of 133,392 chickens died over the past weekend.

Test results confirming whether or not it was due to the H5N6 virus will be released today.

In an all-out effort to contain the spread of the virus, the government has imposed a movement ban of poultry farmers and their vehicles at locations where the virus has tested positive and will set up sterilizing posts nearby.

Officials have been dispatched to 632 farms, traditional markets and slaughterhouses across the country for epidemiologic investigations.