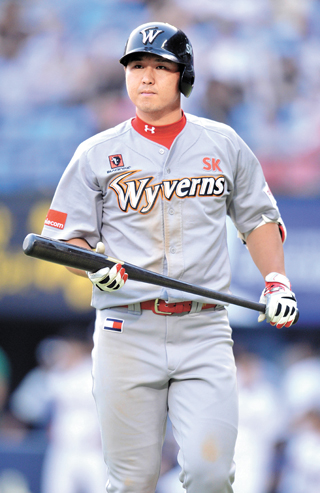 The past two years have been time lost for SK Wyvern’s Choi Jeong, whose stint on the plate was hampered by incessant injuries. But that’s all in the past now for the third baseman with an 8.6 billion won ($7.3 million) contract in his pocket, and whose season this year was one of the highlights of his career.

When he signed with the Wyverns in 2014, Choi became the most expensive free agent in KBO history. Although Park Sok-min topped that record in 2015 with a 9.6 billion won contract, Choi remained highly valued as a franchise star who helped the team become two-time KBO champions in 2007 and 2008, winning the Korean Series MVP honor in 2008.

But immediately following the landmark deal, his career entered a slump.

Ankle and elbow injuries stymied him from going to the plate and he only played in 82 games in 2014 and 81 in 2015, slugging only 14 and 17 home runs throughout, the first time he has failed to send more than 20 balls over the fence since 2010. The Third Baseman Gold Glove, which he has earned every year since 2011, subsequently went in those years to Park, his rival on third base.

But since hitting rock bottom, Choi has made a comeback. Playing in 141 games, nearly 98 percent of the 144 games that the Wyverns played this season, the recovered slugger belted out 40 homers during the regular season, claiming the Home Run title along with Eric Thames of the NC Dinos. 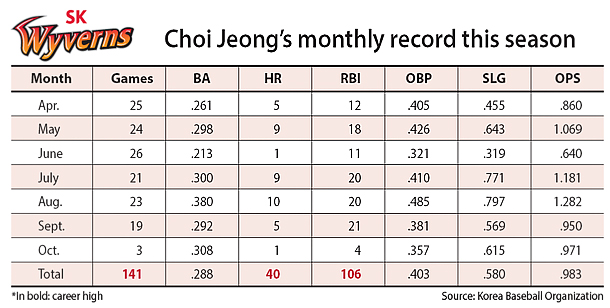 This was first time since 2002 that a Wyverns hitter made more than 40 home runs in a single season. Choi is also the 12th player in the KBO to make 40 homers and 100 runs batted (RBI) in one season.

“I couldn’t play as well as I hoped to in the first part of the season,” Choi said. “But the latter half was such a success, I surprised myself. More than anything else, it feels great to be able to play in almost all season games.”

His performance in June was especially disappointing, during which he batted .213 while cranking out only one home run and 11 RBIs. But Choi said the turnabout came on Aug ust 5 against the Nexen Heroes at Gocheok Sky Dome, where he went 3-for-4 with two homers and four RBIs.

“From the batting practice before the game, I kept telling myself to just swing it away,” Choi said. “I simply let it go and I felt at ease after collecting a hit during my first at-bat of the day. After two straight homers in my third and fourth at-bat, I tried to carry on the feeling.”

After peaking out in a number of aspects of the game, including home run and RBIs, the expectations of fans and the coaching staff for next year are higher than ever. But Choi said his goal for next season is the same as this year, batting over .300 while hitting 30 homers and 100 RBIs. “All the records followed after I manage to play a full season,” Choi said.

About the Home Run title, Choi said it wasn’t something he expected at the onset of the season.

“My initial goal was 30 homers so the title wasn’t in my agenda,” he explained. “But after hitting 30, I thought to myself, ‘why not 35?’ I got there fast and the coaching staff told me to go for 40, asking, ‘when will you ever get this chance again?’ It felt good hitting that last one [during the last of the regular season games on Oct. 8 against the Samsung Lions]. I never hit 30 home runs in my career, and recording 40 in just one season, I was dazed but at the same time, could not stop smiling.”

Despite Choi’s effort, the Wyverns did not make it into the postseason. “I just saw the result,” Choi said. “I cannot remember what it feels like to play in the postseason. I keep picturing what it was like to be in the playoffs but they are just memories, since it’s been a while that we’ve played in one. Back in the days, our goal was to win the Korean Series, but now, it is to make it into the playoffs. But I think we still have it in us. We will get there soon, hopefully.”