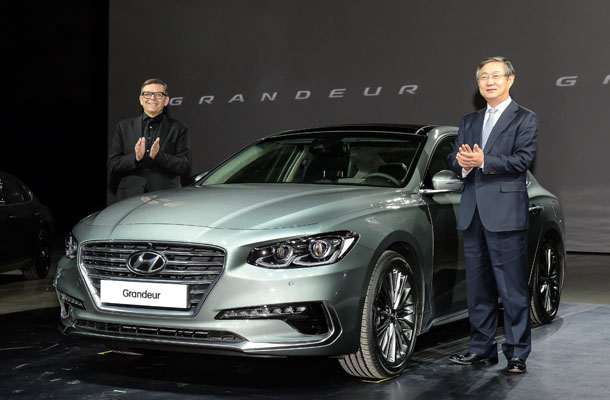 GIMPO, Gyeonggi - Hyundai Motor released its much anticipated Grandeur IG on Tuesday, hoping it will be a savior for the company, whose sales this year have been sluggish.

So far, sales are hot.

Since the company began taking reservations for the premium sedan on Nov. 2, more than 27,000 customers have placed orders, an all-time preorder high for any Hyundai vehicle.

“The IG model will have a younger vibe to it, while preserving the premium and luxury heritage from its previous five versions,” Yang said. The Grandeur IG is the sixth-generation model and is being unveiled after five years of development.

Hyundai Motor officials said its rivals are large sedans from other Korean carmakers and imported sedans that cost no more than 40 million won ($33,991). Renault Samsung’s SM7, Kia Motors’ K7 and GM Korea’s Impala are just a few rivals. BMW’s 5 series, which is expected to be fully overhauled early next year, and Mercedes-Benz’s best-selling E-class sedans have also been named as potential rivals.

The Grandeur has carried a stately, authoritative image in Korea for 30 years. But the IG model is trying to defy that image. “Sophisticated and sporty are the basic concepts of Grandeur IG,” said Jung Rag, an executive vice president at Hyundai Motor.

“Global trend in autonomous driving is enhancing the driving feeling and visibility, but for Hyundai, from the start, we focused on safety of the driver in all aspects such as when driving, parking and taking your car out of the parking space,” said Choi Jin-woo, vice president of mid-large vehicles.

The marketing strategy is targeted to a younger demographic. It unveiled promotional films on the web before the launch to reach millennials.

Despite its initial response, obstacles remain.

Hyundai has been losing market share in Korea. It accounted for 70 percent of the market in 2012 but its share has fallen below 60 percent. This year, the company was hit hard by a five-month strike, which reportedly caused production losses of more than 1.5 trillion won. Hyundai, the nation’s leading carmaker, also received a dent in Korean consumer confidence when it recalled all vehicles equipped with a defective Theta II engine in the United States, but not in its home country.