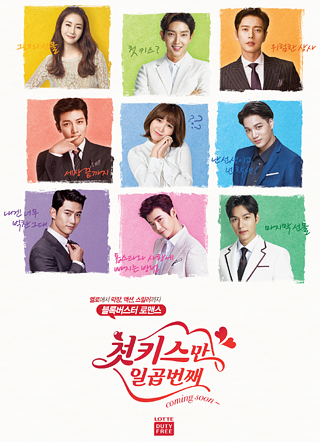 Lotte Duty Free will release a web drama series featuring the company’s celebrity models, which include a slew of Korean pop stars and actors, as part of its broader strategy to make Hallyu, or Korean pop culture, a core part of its marketing.

The series, titled “Seven First Kisses,” was directed and produced by Lotte Duty Free and follows the romantic travails of a young woman working at a duty-free shop. It will feature seven male stars, including actors Lee Joon-gi and Lee Min-ho and boy group idols Kai of EXO and Ok Taec-yeon of 2PM.

The specific date of release and where the web series will be uploaded has still yet to be decided.

Lotte Duty Free unveiled the production’s trailer at a press conference on Tuesday at Lotte World Tower in Jamsil, southern Seoul. Present at the event were officials from over 70 tourism offices in Japan and China, where the popularity of Korean pop culture has led the two countries to produce the most number of tourists to Korea. Famous Chinese bloggers also attended the event.

On Tuesday, just before the press conference, Lotte Duty Free also inked memoranda of understanding with 11 major entertainment companies, including the “big three” in idol management - SM, YG and JYP - to agree on creating more content based on Hallyu and use it to develop Korea’s tourism industry.

Even before the web series, Lotte Duty Free has been putting in more effort to create cultural content related to Hallyu, going one step further than merely using them as promotional materials.

One example is its Family Festival concert, which began in 2006 and has become one of Korea’s most popular annual K-pop concerts. The event has attracted more than 1.3 million foreign visitors so far.