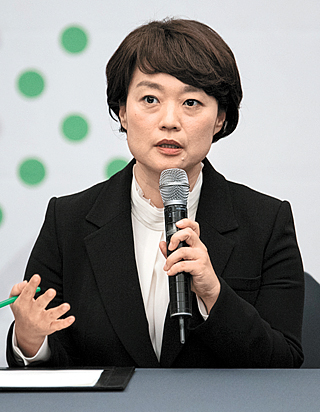 Han Seong-sook, the next CEO of Korea’s top portal site operator Naver, on Tuesday vowed to upgrade the company into a platform that translates top-notch technologies such as artificial intelligence into user-friendly services.

The Naver Connect 2017 conference in southern Seoul was Han’s first official public appearance since her promotion from vice president last month and she disclosed some of the company’s plans. Han’s term begins in March, when current chief Kim Sang-hun, a judge turned businessman, ends his three-year post.

“Naver’s transition into a technology platform essentially means we will offer next-generation technologies in easy and convenient tools anybody, especially small-business operators and content creators banking on our platform for business, can use,” Han said in her keynote on Tuesday.

More than 10,000 businesses have been founded through the project, the company said, and that number is expected to reach 11,000 by the end of the year. Among those small-business operators, 5,500 have annual sales of more than 100 million won ($84,920). These operators were granted technological support from Naver to conduct business online.

Naver’s TalkTalk service, a type of messenger that directly connects consumers with business owners, helped operators do business at any time or in any space and build relationships with customers. Consumers were able to send questions or requests to the operators and receive a response.

For individual content creators, such as web-cartoon artists, musicians and designers, Naver introduced diverse marketplaces such as Grafolio market where artists can upload their illustrations with short stories or music files and sell their work. Independent content creators on the platform increased from 16,000 in April to 24,000 after the project was implemented.

Han, after building her career at former search engine Empas, joined Naver in 2007. She has been leading the development of new services such as Naver V Live, a celebrity broadcasting service and Naver Pay.