The Turkmenbashi International Airport is near national tourist zone Avaza.

Recognizing the fundamental role of sustainable transportation in fighting climate change and achieving a sustainable future, the UN and government of Turkmenistan will organize the first ever Global Sustainable Transport Conference, on Nov. 26 and 27 in Ashgabat, the capital of Turkmenistan. UN Secretary General Ban Ki-Moon and President of Turkmenistan Gurbanguly Berdimuhamedov invite all United Nations member states and international organizations to take an active part in the work of this forum.

The Conference will build on ongoing intergovernmental discussions on sustainable transport. As it is known, the outcome document of the United Nations Conference on Sustainable Development (Rio+20), held in 2012, stresses that transportation and mobility are central to sustainable development. It recognizes the need to promote an integrated approach to policymaking at the national, regional and local levels for transport services and systems to advance sustainable development. The programme of the Conference reflects the diversity and complexity of the transport sector and will provide a platform for forging partnerships and initiatives to advance sustainable transport objectives. 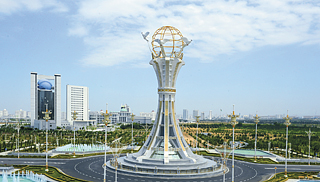 The Monument of Prosperity in Ashgabat, which symbolizes prosperity and peace in the Turkmen land.

Transport drives development — enabling trade, tourism, and economic growth and allowing people to access jobs, services, education and the interactions that help create fulfilled lives. The 2030 Agenda for Sustainable Development, adopted in 2015, also recognizes the global need to adopt policies which enhance sustainable transport systems. In this spirit, the Global Sustainable Transport Conference will bring together key stakeholders from governments, the UN system and other international organizations to engage in a dialogue that emphasizes the integrated and cross-cutting nature of sustainable transport. All modes of transport — road, rail, aviation, ferry and maritime — will be addressed. The issues of developing countries, including the least developed countries, landlocked developing countries and small island developing states, will receive particular focus. Developing countries and their expanding cities face urgent challenges, but they also have opportunities to bypass unsustainable transport practices and find fast-tracks to a new paradigm of sustainability. The Conference will shine a spotlight on these opportunities.

At this conference, Turkmenistan plans to highlight the importance of safe and secure roads in transit corridors to ensure that persons and cargo transit to their destinations without incident. Turkmenistan expresses confidence that the consistent implementation of initiatives to promote international cooperation in the field of transport will allow developing new legal and institutional framework for the expansion of the international transport system linking Asia with Europe. The Turkmen side urges, in the framework of the conference, to discuss the basics of the UN Special Programme for the development of transit and transport opportunities on the Eurasian continent. 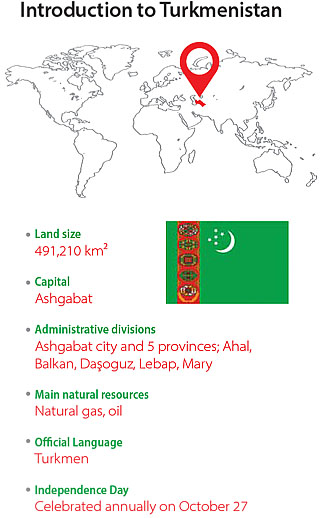 Turkmenistan, having been an active participant of establishment of an integrated multimodal system of transport-transit infrastructure in the vectors of East-West and North-South, considers the opportunity to interface various concepts of traffic flows on the Eurasian continent on the basis of mutual benefit, taking into account the interests of all participants in such projects. The country is ready to conduct substantive negotiations to participate in various formats, including the venues of international and regional economic organizations.

Following this strategy, Turkmenistan has put forward important international initiatives and is taking necessary measures for their implementation. This was clearly demonstrated by organization of the high-level international conference, The Role of Transport and Transit Corridors in Ensuring International Cooperation, Stability and Sustainable Development, held in Ashgabat in September 2014.

The conference adopted the Ashgabat Declaration, which reflected an understanding of the need for elaboration of the criteria of cooperation in the field of transport. Particular emphasis was placed on the importance of taking into account the needs of developing countries, including those that are landlocked. The declaration has brought important new priorities in the work of the Community of Nations and became a fundamental document for drafting the UNGA resolution of 19 December 2014.

The most important task in this regard is fully realize the advantageous geographical position of countries that are a natural transit bridge between Europe and Asia. Located at the crossroads of North-South and East-West, as the Central Asia and the Caspian Basin regions, Turkmenistan is a strong element of strategic stability in the southern belt of Eurasia and is a promising economic partner for European and Asian countries, as well as a major energy, transport and transit hub of continental importance. In view of this, Turkmenistan has identified development of transport infrastructure as one of the absolute priorities of its state policy.

For the purpose of effective implementation of its capacities, Turkmenistan is guided by long-term programs aimed at ensuring the competitiveness of the national transport and communication complex on the world market, as well as its progressive integration into it, and the further expansion of infrastructure through the main thoroughfares, connecting routes and hubs in the East-West and North-South. The priority in this regard is the construction of an extensive and combined infrastructure of transport links and transit, covering the spaces of continental Eurasia with access to the sea terminals of the Black Sea and Baltic regions, South and Southeast Asia and the Middle East.

Left: A highway in Ashgabat, the capital of Turkmenistan, where the Global Sustainable Transport Conference will be held from Nov. 26 to Nov. 27. Right: The opening ceremony of the Kazakhstan-Turkmenistan-Iran railway.

The use of the Kazakhstan-Turkmenistan-Iran railway is greatly important in the formation of the international transport corridor North-South. In addition, the transport corridor of Uzbekistan-Turkmenistan-Iran-Oman is for facilitation of further expansion of mutually beneficial trade and economic cooperation between the Central Asia and the Middle East.

In addition, the large-scale project on the Central Asia-Middle East transport corridor is considered as one of the most effective factors in ensuring sustainable development both in the regional and international scale.

We should also mention the construction of the transport corridor Afghanistan-Turkmenistan-Azerbaijan-Georgia and a project to build a railway line through Turkmenistan-Afghanistan-Tajikistan.

One of the significant intermodal hubs of transport infrastructure in Turkmenistan is the international sea port of city of Turkmenbashi on the Caspian coast. It will create exclusively favorable conditions for the access of European countries to the commodity markets of the Middle East and the countries of the Indian Ocean. Construction of its own navy for Turkmenistan has a strategic and political importance.

It is also important to note the support by Turkmenistan of the International Road Transport Union’s initiative to create a modal highway in Central Asia with access to Turkey.

In addition, Turkmenistan has expressed its willingness to act as an active partner in the Traceca program (Transport Corridor Europe-Caucasus-Asia — an international transport programme involving the European Union and 14 member States of the Eastern European, Caucasian and Central Asian region). Thus, the basis for the integration of transport and transit systems of Turkmenistan into the world system is the creation of an extensive transport and communication infrastructure and network of logistics terminals. Aimed at addressing the global challenges facing the international community, Turkmenistan creates favorable conditions for the formation of transport and transit corridors that meet the requirements of time and the holding of UN Global Conference is one of the bright examples.

This upcoming First Global Conference will serve as a platform for exchanging different country’s experiences and lessons learned, for fostering regional and multilateral cooperation to develop sustainable transportation systems, and for announcing concrete partnership initiatives on sustainable transport for the sustainable development goals.