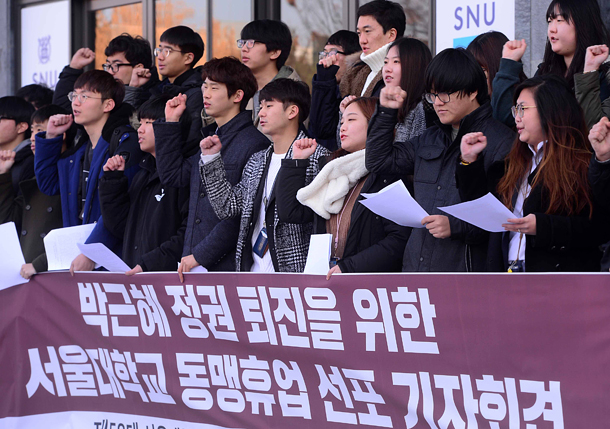 Leaders of the student council of Seoul National University declare a campaign in Seoul Tuesday to boycott classes en masse to demand President Park Geun-hye’s resignation. Many students expressed their frustration and depression over the ongoing corruption scandal. [NEWSIS]

Some are demanding Park resign at rallies, with even more denouncing the president on social media.

Park was named a criminal suspect Sunday in a corruption scandal involving Choi and two aides. She cannot be indicted as president because of the immunity afforded her in the Constitution, but can be after she leaves office.

Hundreds of thousands of people have attended rallies to demand Park step down for weeks.

“Come forward, Park Geun-hye!” shouted actor Jung Woo-sung on Sunday at a theater in Seoul where fans gathered to watch him in the movie “Asura: The City of Madness.” Jung’s message to the president was a parody of a line from the film, and the crowd erupted in cheers. His performance was recorded by fans and went viral online.

Jung is reportedly on a blacklist of actors and celebrities kept by officials in the government. The people on the list are reportedly critics of the government, and were banned from getting any support from the Ministry of Culture, Sports and Tourism.

Presidential friend Choi had strong influence at that ministry.

“Now I know I can trust these actors and celebrities who are alleged to be on the government’s blacklist,” a user posted on Twitter on Tuesday.

Actor Yoo Ah-in and singer Kim Dong-wan carried candles at the vigil in Gwanghwamun Square in central Seoul on Saturday, which has been held weekly to demand the ouster of Park. Kim has been a consistent presence at the rallies, posting on social media photos of his participation in the Nov. 5 and Nov. 12 rallies.

“There are 250,000 in Gwanghwamun now,” actor Lee Joon posted on his Instagram page from the rally Saturday. “The rally will go on despite the rain. Do keep coming.”

Singer Jeon In-kwon sang his own songs at the Saturday rally, accompanied by the crowd.

Singer Lee Seung-hwan hung a banner on a building he owns in Gangdong District, eastern Seoul, early this month that reads, “Out with Park Geun-hye, in with democracy!”

Athletes like swimmer Park Tae-hwan have stepped forward to reveal pressure they received from the Sports Ministry.

According to Park, former Vice Minister of Culture Kim Chong had pressured him not to try to go to the 2016 Rio Olympics or he would face a backlash that could affect his sponsorships.

Olympic figure skater Kim Yuna was also reported to have felt the brunt of the Sports Ministry after she refused to participate in a national group exercise directed by Choi’s confidant Cha Eun-taek and attended by President Park.

Some reports say Kim may have been on the blacklist. They pointed out that Kim was denied a sports hero award from the Korean Sports & Olympic Committee in 2015. On the other hand, rhythmic gymnast Son Yeon-jae was reported to have received favors from the Sports Ministry after she participated in the controversial group exercise routine. After reports on the allegation went viral, her Instagram page was filled with posts like, “Explain yourself,” and “Did you also receive free treatments at Chaum?”

Son was found to have frequented Chaum, an anti-aging center in Gangnam’s affluent Cheongdam-dong, as did Park. The president is accused of getting 150 million won ($127,920) worth of health and beauty care services for free.

“Son attended the group exercise as a national athlete, with a good heart,” Son’s agency said in an official statement on Monday. “Son received healthcare assistance from Chaum, and paid for all the treatments.”

Psychologists say celebrities are just feeling the way ordinary Koreans do - and that isn’t very well.

“It seems the whole nation is suffering a group trauma,” said Lee Na-mi, a licensed psychologist. On social media platforms, expressions like “the Soon-sil syndrome” were newly coined to denote a sense of listlessness and depression over the state of affairs in Korea since the start of the so-called Choi-gate scandal.

“My trust in the president, the government, and the country has crumbled,” said a 22-year-old college student. Some young netizens have started calling themselves the “resignation generation” in online communities.

One facet in a very wide-ranging scandal is that Choi’s daughter Chung Yoo-ra was found to have received favorable treatment in the admissions process and in attendance records and grades at Ewha Womans University, which has particularly riled up the young generation. Students at more than 100 universities have called on Park to step down.

“I’m looking to find jobs abroad,” said a 27-year-old surnamed Park. “I would like to leave immediately as I see no hope of getting anywhere in this country.”

“The government needs to address this situation immediately,” said Suh Yi-jong, a sociology professor at Seoul National University. “Once the people’s sense of loss continues over the long term, it could lead to extreme choices, such as committing crimes.”