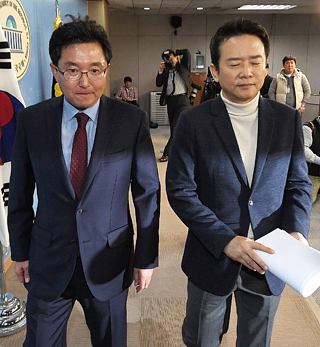 Two high-profile reformers in the Saenuri Party quit Tuesday to distance themselves from President Park Geun-hye and party loyalists attempting to shield her from a mushrooming abuse of power scandal.

Gyeonggi Governor Nam Kyung-pil and Rep. Kim Yong-tae held a press conference in the morning announcing their decisions to leave the party. They vowed to persuade more Saenuri lawmakers to follow them and join a move to impeach Park.

“A president who covets private gains by destroying constitutional values and violating the laws is unfit to be delegated the highest power from the people,” Nam said. “If she is that president, the people have to take back the power from her.”

Nam said the Saenuri Party no longer has a reason to exist because “it came to exist only to serve the profits of an individual or a faction.” He vowed to build a new political group with Rep. Kim.

On Sunday the prosecution announced that Park is a suspect in an ongoing investigation into the abuse of power scandal involving her friend Choi Soon-sil and associates. The president was labeled by her own prosecutors as a co-conspirator in various criminal charges against Choi and two aides. They could not indict the president because of the immunity afforded her in the constitution.

The leadership of the ruling conservative party, headed by Chairman Lee Jung-hyun, continued to defend Park from growing demands that she resign.

“The people say the president and the Saenuri Party are accomplices, and that is irrefutably true,” Kim said.

Following the press conference, Nam and Kim told reporters that their first mission, in cooperation with other politicians who agree with their plans, will be starting the process to impeach President Park. “What we need now is clearly distinguishing the supporters and opponents of impeachment, and the best way to do that is a split of the [Saenuri] party,” Kim said.

“Each and every Saenuri lawmaker must clearly state his or her position in front of history and the people,” Nam said. “They must say clearly whether they support or oppose impeachment.”

With their departures, the number of local governments headed by Saenuri members went down to five and the number of the Saenuri lawmakers was reduced to 128, although it is still the largest group in the National Assembly. It remains to be seen if more lawmakers will follow Nam and Kim. “About 80 to 90 lawmakers are being bullied by a hard-line leadership loyal to Park,” said Kim. “More lawmakers will join us starting next week after their efforts to oust the leadership is defeated.”

In an interview with CBS radio, Nam said an en masse defection is “just a matter of time.”

Asked if there will be at least 20 lawmakers leaving the party, the minimum needed to create so-called negotiation bloc in the National Assembly, Nam said “I am not sure if they will actually act, but there are far more lawmakers who are considering leaving.” Negotiation blocs can send representatives to major legislative negotiations, and they receive higher state subsidies than smaller parties.

Rep. Hwang Young-cheul, spokesman for an emergency council formed earlier this month by reformist leaders, said more Saenuri lawmakers support the idea of dividing the party, but it remains to be seen if the conservative ruling party will actually split. If more than 20 lawmakers leave the party, a further exodus is likely, a party source also said.

Two decisions to watch for are by Reps. Kim Moo-sung and Yoo Seong-min, high-profile adversaries of the president.

He, however, said he will support the presidential impeachment if a motion is presented at the National Assembly. “I will vote for it. Based on the revelations so far, she deserves to be impeached,” he said.

Observers said the decision of Rep. Yoo, who has become an icon of the crusade against Park, will matter the most. They said about 70 lawmakers are likely to leave the party if Yoo abandons his Saenuri membership.

Yoo denied the possibility of departure on Tuesday. “There is a sense of crisis that the party may collapse rapidly,” he said. “I will stay with the party and do my best to reform it.”

If Park insists on keeping her Saenuri membership amid the opposition parties’ move to impeach her, it may push Saenuri supporters of impeachment to abandon the party.