Ansip aims for one online market

Ansip aims for one online market 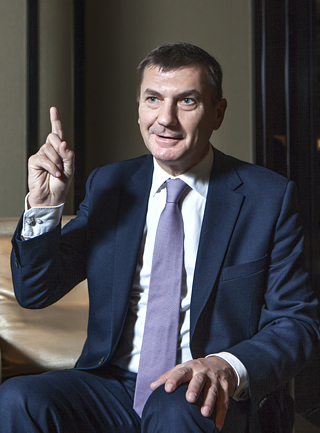 Former Estonian Prime Minister Andrus Ansip, a vice president of the European Commission, said he sees great potential for cooperation between the European Union and Korea, especially in 5G networks, as Europe moves toward a digital single market.

“The creation of the digital single market in the European Union will be beneficial for everybody, including Korean companies,” Ansip, vice president for the European Commission’s Digital Single Market (DSM), told the Korea JoongAng Daily as he sat for an interview Friday at the Four Seasons Hotel in central Seoul.

“But in the digital field, we still have 28 relatively small markets. Because our life and economy is every day becoming more and more digital, we have to be able tear down barriers once again and create a digital single market in the European Union.”

He described the European Commission’s vision of a digital age market that would tear down regulatory walls and move from being made up of 28 national markets to one, which he said would also be beneficial to Korean companies.

“Global players, such as Samsung Electronics or LG Electronics, need to deal with 28 different types of rules with a fragmented EU digital market,” said Ansip. “But it will be much easier for Korean companies to do business in Europe with one set of market rules, not 28 sets.”

He said the commission adopted a strategy with 16 different initiatives in May of last year, adding, “This year is the delivery year.”

“Our people can also enjoy portability of content next year,” he continued. “Today, 20 percent of Europeans are spending at least 10 days of the year in other EU member states. Many of these people will like to have access, when traveling to another EU member state, to their legally bought digital content in their home countries, but because of copyright restrictions, they cannot.”

Ansip, on his first visit to Seoul, met with government officials involved in digital and technology policy and visited conglomerates, start-ups and innovation complexes such as Pangyo Techno Valley, the industrial complex in Gyeonggi.

“We have to deepen digital cooperation between South Korea and European Union,” Ansip said, following his various talks during his three-day visit to Seoul, which wrapped up on Saturday. This includes the fifth-generation mobile communications network, also known as 5G, as well as research and development, cyber security issues, e-government systems and high level political discussions on ICT.

Ansip said he visited Samsung Electronics Thursday, where he had “fruitful discussions” and visited the Samsung Innovation Museum in Suwon, Gyeonggi.

“The most impressive part was the 5G technology,” he recalled, “and this is about much higher speeds, more efficient usage of energy, more efficient usage of spectrum. If our people, our industries, can use 5G technology, then we don’t have to dream about self driving cars or remote search operations; it will become a reality. And Samsung is pretty close to that already.”

“I took part in the G-7 meeting in Japan and they said they would use 5G during their Tokyo Olympic Games in 2020,” said Ansip. “In the EU, we hope for all urban areas and main transport paths to be connected to 5g networks by 2025. And at least one major city in all the member states have to provide commercial-based 5G services by 2020. This is a global competition. I’m happy that cooperation between South Korea and the EU was already pretty good in this field, but we have to agree to common standards. This is important not only for South Korea, but the EU and the whole world.”

He pointed out, “In Europe, I think all the people know that South Korea is the most innovative country in the world. It’s a real leader in research and development investment.”

Ansip also weighed in on Brexit and the repercussion of the United Kingdom’s referendum on leaving the European Union.

“I’m absolutely sure the European Union is a good and beneficial project for all the EU member states,” he said.

Ansip said that some 70 to 80 percent of Estonia’s exports are to other EU markets.

“But the single market was and is beneficial for all of the EU member states, including for the United Kingdom,” he said.

Relations between the European Union and South Korea are in good shape, he said, with a current trade volume this year of 90 billion euros ($95.7 billion).