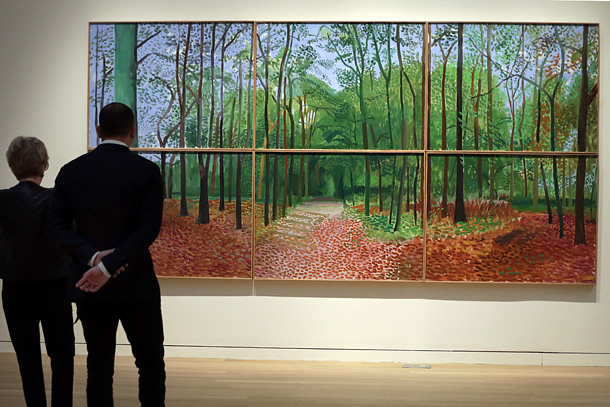 Hockney’s autumnal scene is part of a series of paintings inspired by the countryside of Yorkshire, England. The painting, measuring over 10 feet wide, is composed of six connected canvases. Sotheby’s said Hockney devised the method because of the narrow staircase of his studio.

It was included in a Hockney exhibition at the Royal Academy in London in 2012. Next February, the Tate Britain is planning a retrospective of the artist’s works.

“A B, St. James,” a richly textured painting of red, orange, yellow, green and aquamarine blue, belongs to a series of “London Paintings” that Richter created after visiting England’s capital city in 1987. It is one of five executed with a horizontal orientation. It sold for $22.7 million.

“A B, Still” is a brighter work dominated by a fiery red and cool blue with yellow scattered across the canvas. It sold for just under $34 million.

A monumental six-panel frieze by Basquiat titled “Brother’s Sausage” fetched $18.6 million. The young artist created it in 1983, touching on themes of prejudice, inequality and greed.

Meanwhile, a painting from Claude Monet’s acclaimed “Grainstack” series fetched $81.4 million at Christie’s New York auction of impressionist and modern art. The Nov. 16 evening sale set a new auction record for the artist. The previous auction record for a Monet was $80.4 million set in 2008.

The 1891 painting, shimmering with hues of reds, pinks, blues and yellow, depicts a close-up of a single cone-shaped stack after harvest.

Monet’s “Grainstack” series - 25 in all - was painted just steps from his home outside a farmer’s field in the French village of Giverny. AP