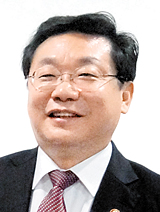 Minister of Trade, Industry and Energy Joo Hyung-hwan said he will file appeals to the World Trade Organization (WTO) if the incoming Trump administration takes unfair measures on tariffs.

“The free trade agreement between the two countries helped Korean investments in the U.S. grow more than 200 percent and created more than 10,000 jobs in the United States,” Joo said Wednesday.

“The two countries need to continue to strengthen economic ties and we will come up with specific measures if the United States decides to take protectionist policies. The government will even consider appealing to the WTO based on international trade rules if there are any unfair activities to minimize the possible damage from it.”

Joo said that although there are legitimate worries that Donald Trump may be more protectionist, there are positive factors that could lead to the two countries strengthening economic ties.

“Trump said he will invest some $1 trillion in infrastructure and help the manufacturing sector grow once again, and I believe it is our job to find new business in such sectors, where the two countries can both benefit,” said Joo.

The government and private sector have established a forum to monitor the country’s trade relationship with the United States and held the first meeting on Wednesday in Seoul.

The government said it will meet regularly to discuss possible changes from the incoming U.S. administration.

Experts who attended Wednesday’s meeting also expressed concerns about the new administration in the United States.

“The incoming administration has a high chance of prioritizing utilitarianism, and it is necessary for us to take preemptive measures to minimize the negative impact,” said the Korea Institute for Industrial Economics & Trade (KIET) in a report released Wednesday.

“However, one doesn’t have to be totally pessimistic about the two countries’ future economic ties, as there are chances that Trump will not be able to proceed with what he has been saying he will do when he becomes the president due to a backlash from Congress, and breaking trade deals with other countries will also hurt the United States’ credibility. We don’t think Trump will totally break the free trade agreement between the two countries but think there is a possibility that he will ask to renegotiate some issues.”

The Korea Institute for International Economic Policy (KIEP) argued that the incoming administration will be a threat to Korean companies doing business in China.

“There is a high possibility of the United States declaring China a currency manipulator and trade conflicts between those two countries will weaken Korea’s exports to China,” said KIEP in the report.

“But there also is a chance that some Korean companies, such as those in electronics and machinery sectors, can benefit from the two countries conflicts, as they are competing against Chinese companies in the U.S. market.”