A studied approach to performance : Bae Jong-ok turned to academia to learn more and improve her acting

A studied approach to performance : Bae Jong-ok turned to academia to learn more and improve her acting 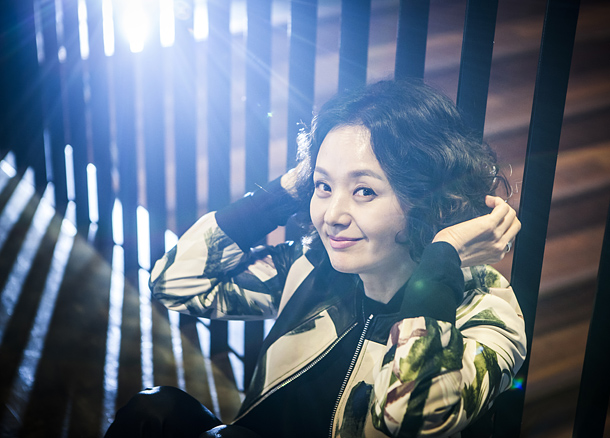 Actress Bae Jong-ok says she began her career with “no good looks, no talent and no network.” But she believes that actors can improve their performance through studying. She is, in fact, one of Korea’s few actors who, alongside having an active career, has received a doctoral degree. [KWON HYUK-JAE]

That actress Bae Jong-ok cannot watch horror films is a surprise, as looking back at her career that started in 1985, she seems like someone who has no fear.

In her early years, she was often harshly criticized for her poor performance. It’s a famous tale in Korea’s showbiz industry that drama writer No Hee-gyeong once held her by the neck in an elevator, pleading her to perform well.

Most people would quit after being bombarded with so much criticism. But not Bae.

Since her divorce in 1994, she’s been a single mom, raising a daughter, and has played a number of roles that left strong impression on viewers, most recently as a femme fatale in MBC drama “Monster.”

Bae has also published a book on her life as an actress.

She is one of the brains in Korea’s acting scene - one of Korea’s few actors who, along with an active career, has completed a doctoral degree. After receiving the degree in 2009 from Korea University with her study on the correlation between production crews and reactions of netizen, she got many offers to teach at universities - all of which she turned down.

“I didn’t pursue the degree to be a professor,” she said. “I want to be a good actress until the end.”

Below is an edited excerpt from an interview with her.

Q. What would you say is “good acting”?

A. The first and most important prerequisite for an actor is speaking. It’s the basic of all basics. When someone speaks well, it also seems like the person’s acting is good. Those who are only betting on their good looks won’t get very far.

Don’t you think you are pretty, though?

I began without good looks, without talent and without a network. When I went to shoot, I felt I was inadequate in every possible way. I studied how actors should walk, speak and gaze. I analyzed all of the characteristics.

You wrote in your book that your mother owned a bar. Tell us about her.

I’ve never mentioned my mother in detail in public before writing the book. She was such a strong woman. She also raised my daughter, as I got divorced in 1994. One night during my high school senior year, I was studying. I remember her calling me [to the bar] and serving me chicken and beer. A week before her death [in 2002], she told me that those were the happiest days of her life. My heart still aches thinking about her.

What prompted you to pursue a Ph.D?

I am not very academic, but I thought actors can improve their performance through studying. I also needed an answer as to why I act. Thanks to my studies, I now feel like I have a perspective on dramas.

I understand you will be acting in a play, “Secret of a Flower.” How did you get to star in it?

It’s a comedy, and I play a housewife who drinks every night. It premiered last year and I loved the character so much that I pleaded to director Jang Jin that he cast me for the role the next time. Practice is so hard but just thinking about the character makes me laugh. “In Between Seasons” [a film] that I’m in will also hit screens next year.

I hear you read classics like Friedrich Nietzsche [1844-1900]. Don’t you find it difficult?

I’ve only read one book of Nietzsche but there are so many things he said that speak to me. On my messenger account profile, I posted his saying, “This life as you now live it and have lived it, you will have to live once more and innumerable times more.” I believe an actor is made of one percent talent and 99 percent effort. Nietzsche also said not to be sad for not being gifted because you can learn it.

What would you have become if not an actress?

Everyone said no when I said I wanted to be an actress, because since I was young I lacked presence. I guess I would’ve been a Korean language and literature teacher had I not become an actress - a very rigid and obnoxious one (laughs).