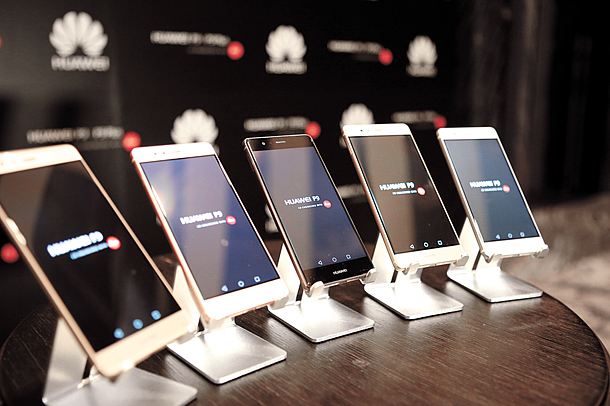 Huawei will begin selling the P9 in Korea on Dec. 2. [HUAWEI KOREA]

Huawei Korea unveiled its P9 and P9 Plus smartphones exclusively through telecom operator LG U+ in Korea on Wednesday. This is the first time the Chinese network device giant and the world’s third-largest smartphone producer is debuting its premium models on the home turf of Samsung’s Galaxy.

The two models - which have 5.2 and 5.5-inch screens - will begin selling Dec. 2, eight months after they were showcased in an exclusive launch in London. The company posted 9 million in global sales so far. The prices are not available yet but are projected to be 700,000 won ($595) to 800,000 won, according to industry insiders.

In Europe, the smartphones retail from 599 euros ($635) to 749 euros depending on the screen size and storage size of 32 gigabytes or 64 gigabytes - levels similar to premium phones in Korea. The launch in Korea is quite late, given the models passed Korea’s National Radio Research Agency conformity assessment in late September, a procedure every mobile device undergoes before sale.

The recent release of the Mate 9 smartphone, which sports the largest screen size at 5.9 inches and a second-generation Leica dual-lens camera, has already made the P9 and its bigger cousin old models, however. Johnny Lau, head of Huawei’s Korean consumer business, said at a launch on Wednesday in central Seoul the company is thinking of launching the Mate 9 and P10, the follow-up to the P9.

The most powerful feature the phones boast is a dual-lens rear camera developed in partnership with German camera icon Leica, the first of its kind for a smartphone maker.

“Smartphones’ camera feature has become a crucial factor for consumers when it comes to choosing the smartphone, given that 80 percent of the one trillion photos taken last year worldwide were made with smartphones,” said Lau.

The phones are powered by Huawei’s own EMUI operating system - like Xiaomi’s MIUI - that has reorganized the Android with a notification panel, menus and a unique memory cleaning utility. The move to rely less on Android differs from that of Samsung and LG, which are more dependent on the Google software.

LG U+ has been the most persistent among the three telecom operators in Korea to introduce Huawei phones in Korea. The LG subsidiary was the first to unveil the X3 in Korea in 2014 and later added the Y6 and H Phone to the lineup. Most recently, the two companies linked to operate an open laboratory to experiment with NarrowBand-Internet of Things technologies.

“Huawei is the world’s No. 3 smartphone vendor, and the P9 and P9 Plus have had their potential proven after selling over 9 million units,” said an LG U+ spokesman. “The introduction of the two models is an attempt at diversifying our product portfolio in the premium smartphone market currently dominated by Samsung and Apple.”

Huawei is ambitious to proclaim its plan to overtake Apple in two years. The company has landed the No. 3 spot in the smartphone market in just four years.