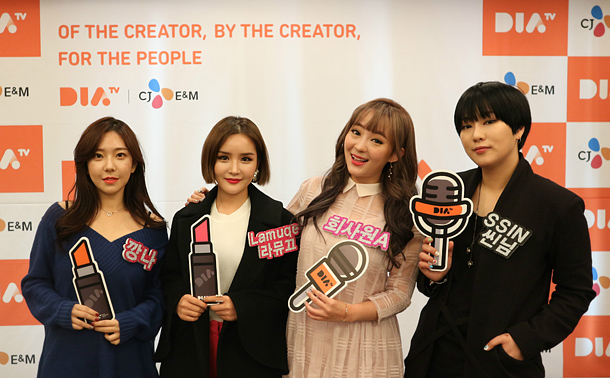 CJ E&M will launch Dia TV, a cable channel dedicated to YouTubers, next year. From left, Kkangna, Lamuqe, Calary Girl and Ssin, all of whom are affiliated with Dia TV, pose for a photo at a media briefing Wednesday in central Seoul. [CJ E&M]

Dia TV, run by Korean entertainment giant CJ E&M, will start a cable channel solely dedicated to YouTubers, the first in Asia. The channel will go on the air on Jan. 1, 2017.

A multi-channel network (MCN) is a new kind of business that helps YouTubers and so-called broadcast jockeys on live-streaming websites generate revenue and share profits.

CJ E&M’s Dia TV has partnered with nearly 1,000 YouTubers and provided them with administrative support. It started its MCN business in 2013 and launched Dia TV last year.

“It is time for creators who have stayed on online channels to advance into an offline platform,” said Hwang Hyung-jun, general manager of Dia TV, at a media briefing Wednesday.

“We are going to create an interactive platform where viewers can express their opinion, such as through voting, and make programs together.”

The channel will air live-streaming programs created by and starring YouTubers, who can interact with viewers at the same time, a similar concept to online channels. Dia TV will launch a smartphone app that will connect viewers with broadcast jockeys on TV.

Themes for the channel include beauty content starring well-known YouTubers such as Ssin, Lamuqu and Calary Girl. Cooking and other entertainment content will be aired too.

Some programs will start out without a certain theme and then decide on one after getting feedback from viewers, according to Dia TV.

“The target audience of Dia TV’s channel is people aged between 16 and 29 years old whom we like to label the C Generation, because they produce, share and consume diverse content,” said Rhee Hak-sung, director at Dia TV.

“We are going toward opening a multi-platform network where one individual type of content can be shared on diverse platforms. It will provide new job opportunities for youngsters as well.”

CJ E&M said it will shut the OCNseries channel and use it for Dia TV content. Dia TV officials said they will test-run the Dia TV channel in December before the official launch next year. Well-known YouTubers will get to star on the channel after getting some training.

Live-streaming programs will be aired on prime time between 8 p.m. and 10 p.m. daily. At other times of the day, the channel will air videos that have been filmed for YouTube after editing.