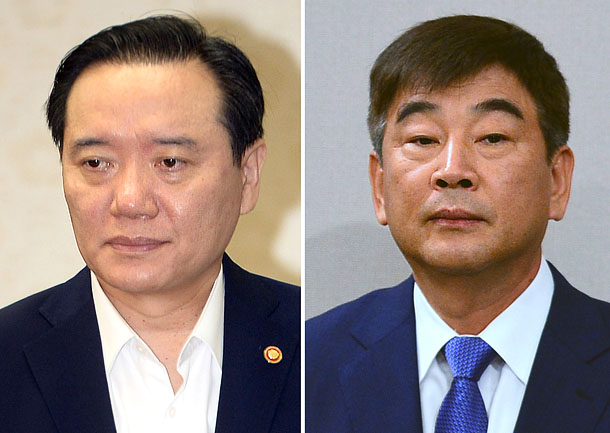 The minister of justice and the senior civil affairs presidential secretary tendered their resignations, the Blue House said Wednesday, following an unprecedented clash between President Park Geun-hye and her own prosecutors over an abuse of power investigation and their description of her as a “co-conspirator” in the case.

Presidential spokesman Jung Young-kuk said Wednesday Justice Minister Kim Hyun-woong and Senior Civil Affairs Secretary Choi Jai-kyeong expressed their intentions to step down from their posts, but Park has yet to accept the resignations.

“Minister Kim believed this is the right thing to do, considering the circumstances,” the ministry said in a statement. “He tendered the resignation Monday.”

Choi did not issue a public statement on the resignation.

Kim was appointed to the post, which oversees the criminal justice system and other legal affairs of the administration, in July 2015. He and Prosecutor General Kim Soo-nam are alumni of the Judicial Research and Training Institute.

Choi was appointed on Oct. 30 and received his credential last Friday. The senior civil affairs secretary is a powerful post that supervises the prosecution, police and the National Intelligence Service. Choi replaced Woo Byung-woo. Park resisted months of pressure to fire Woo, accused of corruption, but let him go in the aftermath of the mushrooming abuse of power scandal.

The resignations were submitted as the prosecution made clear it has no intention to go easy on the president as they investigate ever-widening accusation that Park’s friend Choi Soon-sil committed various crimes with the help of presidential aides - and, according to prosecutors last Sunday, the president herself.

Over the past weeks, the prosecution conducted a special investigation into a series of allegations that Choi, Park’s longtime friend, strong-armed conglomerates into making massive donations to cultural and sports foundations and misappropriated the money to create slush funds. She was also suspected of having influenced state affairs by receiving confidential information from the Blue House.

On Sunday, prosecutors indicted Choi and a former Blue House aide over a wide range of charges including coercion. Another former presidential secretary was indicted on charges of leaking secret information to Choi. The prosecutors said Park was a co-conspirator in most of the crimes, but it could not press charges against her because of presidential immunity guaranteed in the constitution.

But she can be prosecuted for those crimes after she leaves office.

Prosecutors summoned Park for questioning last week, but she delayed it. Following Sunday’s indictments, Park, through her lawyer and spokesman, questioned the integrity of the prosecutors and refused to cooperate with their plan to question her. The Blue House and Park’s lawyer denied all charges, calling them a “house of cards” destined to collapse in a courtroom.

There is no sign that the conflict will subside, and the prosecution said Wednesday that it still wants to question Park in person. The special investigation team sent a request to the president through her lawyer that they want to question her before next Tuesday.

The clash between the president and the prosecution appeared to be a dilemma for Kim and Choi. In an interview with newspaper Money Today, Choi said Wednesday that he decided to step down because he failed to properly assist the president and oversee the law enforcement authorities. “As a public servant appointed by the president, I thought resignation was the right thing to do.”

“Some people say the Blue House is a wagon going up in flames and I must abandon it quickly,” he said. “But this is not why I decided to tender my resignation.”

“Choi was trying to take moral responsibility, as the prosecution’s attacks on Park were far stronger than anticipated,” a Blue House source said.

Sources in the prosecution and at the ministry said Kim was also frustrated when the president became a suspect in the case. Before last Sunday, prosecutors described her as a witness, not as a suspect.

After the National Assembly approved an independent counsel to go after the president, Kim decided that he must not stay in his post, the sources said.

A senior prosecutor said Kim and Choi probably felt uncomfortable that they were not informed of the prosecution’s conclusions in the case in advance. In an ordinary criminal investigation, the Justice Ministry receives a briefing from the Supreme Public Prosecutors Office and a report is relayed to the Blue House’s senior civil affairs secretary.

After its launch on Oct. 27, however, the special investigation team bypassed the ordinary reporting channel and only briefed the prosecutor general.

“The prosecution was extremely cognizant that it would face a catastrophe if there was a report that the investigation findings were offered to the ministry or the Blue House,” said a prosecutor from the Supreme Public Prosecutors Office.

A prosecutor-turned-lawyer said Kim and Choi were actually challenging the president. “Park’s refusal to cooperate with the prosecution’s investigation is undermining the authority of the prosecutor general, whom she appointed,” he said.