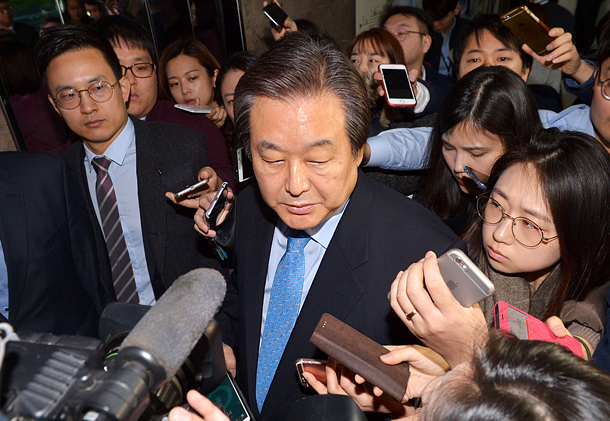 Reporters rain questions on Kim Moo-sung, former chairman of the ruling Saenuri Party, as he leaves a press conference at the National Assembly Wednesday. Kim announced that he will not run in the next presidential election and will help the National Assembly impeach President Park Geun-hye. [NEWSIS]

Rep. Kim Moo-sung, former chairman of the ruling party and chief campaign manager for President Park Geun-hye in the 2012 race, said Wednesday that he will sponsor a motion to impeach her.

Kim, a six-term lawmaker of the Saenuri Party, held a press conference in the morning and announced the abandoning of his ambition to run in the next presidential election.

“It was a dream for the final chapter of my political career,” Kim said. He is giving up that dream “because I share responsibility for the current national chaos as a politician who contributed to the launch of the Park administration and a former chairman of the Saenuri Party.”

Calling Park a failed president, Kim said he will do everything to prevent the fall of the conservatives due to the crisis surrounding Park.

“A president who violated the Constitution must be impeached,” he said. “In order to reinvent the conservatives and to take the responsibility before the people, I will lead a discussion inside the Saenuri Party to sponsor a motion to impeach her.”

After weeks of investigation, the prosecution Sunday indicted Park’s friend Choi Soon-sil and two former presidential aides for a range of crimes including coercion of money from big companies and the creation of slush funds. The prosecutors called Park a “co-conspirator” in most of the crimes, but could not indict her because of the presidential immunity stipulated in the Constitution. But Park can be charged after she steps down.

Asked if he will leave the Saenuri Party, Kim said he has no plan right now, stressing that he will start the impeachment movement from within the ruling party.

Kim had a rocky relationship with Park. He supported her for a long time, overseeing her campaign in 2007 to become the conservative presidential candidate for president, which Park lost to Lee Myung-bak. Their relationship withered when Kim disagreed with Park’s decision in 2009 to support the relocation of most government offices to Sejong City.

After her presidential campaign faced a meltdown in October 2012 due to raging internal strife, Park appointed Kim as campaign chief. He was given a large degree of credit for the success of the campaign.

From July 2014 until April 2016, Kim served as the chairman of the Saenuri Party. During the months leading up to the general election in April, a nomination war broke out between Kim and Park loyalists after he challenged some candidate selections influenced by the president’s allies. He stepped down from the chairmanship after the Saenuri’s withering defeat. His vow to impeach Park on Wednesday irreparably ended their relationship.

Kim said Wednesday a group of Saenuri politicians who are against Park and the current Saenuri leadership will support him. The group, dubbed a crisis management council, was launched earlier this month in protest of the Saenuri leadership of Chairman Lee Jung-hyun and other Park loyalists. The council is led by 12 senior politicians including Kim and Rep. Yoo Seong-min, an icon of resistance against Park.

“The opposition parties are hesitating to make a bold move to impeach her because of political calculations,” Kim said Wednesday. “The council said the Saenuri Party must take the initiative to take responsibility for the situation.”

Rep. Yoo also said Wednesday that more Saenuri lawmakers are supporting impeachment. He said the council decided on Sunday to start a process to impeach Park and urged the opposition parties to start its process as quickly as possible.

Kim’s announcement is expected to speed up the National Assembly’s process to impeach the president. Saenuri lawmakers’ support is crucial to pass the motion.

Three opposition parties decided to push forward the presidential impeachment after Park refused to step down, denied all the charges made by prosecutors and refused to cooperate with their investigation. The Minjoo Party of Korea, People’s Party, Justice Party and liberal independents together occupy 171 seats in the 300-member National Assembly. Two hundred votes are needed to pass a presidential impeachment motion.

A survey of the Saenuri lawmakers showed that 31 will vote for impeachment if a motion is introduced to the plenary session. On Tuesday and Wednesday, the JoongAng Ilbo surveyed all Saenuri lawmakers, including Rep. Kim Yong-tae, who announced his decision to quit the party, about their position on the impeachment.

Of the 129 lawmakers, 112 responded to the survey and 31 said they will vote for impeachment. Another 51 said they are undecided or refused to answer. Thirty lawmakers said they would vote against it.

An impeachment motion requires a secret vote, and opposition lawmakers said they want to change the law to hold an open vote to put pressure on Saenuri lawmakers to vote as they say they will. A bill to allow an open vote was jointly sponsored by the Minjoo Party and the People’s Party and presented to the legislature on Wednesday. Minjoo Rep. Kim Han-jung said a secret vote on an impeachment motion goes against the people’s right to know how lawmakers vote. He added that other countries hold open votes for a presidential impeachment.

Some, however, disagreed with the idea, because Saenuri lawmakers with constituencies in Park strongholds may not be able to support the impeachment in an open vote. “Impeaching a president from your own party is not easy,” said Rep. Park Wan-joo of the Minjoo Party. “A secret vote may get more support.”

Meanwhile, the Minjoo Party and the People’s Party each started drafting impeachment motions on Wednesday. They will later compare their drafts to write a joint motion.

The Minjoo Party said its draft will be completed early next week and finalized after a discussion with experts and civic groups. It formed a nine-member legal preparation team for the process. The People’s Party also formed a team to prepare its impeachment motion. The motion is expected to be presented as early as the first week of December. The National Assembly scheduled main sessions on Dec. 1 and 2 and 8 and 9, and expectations are growing that an impeachment motion will be presented on Dec. 1.