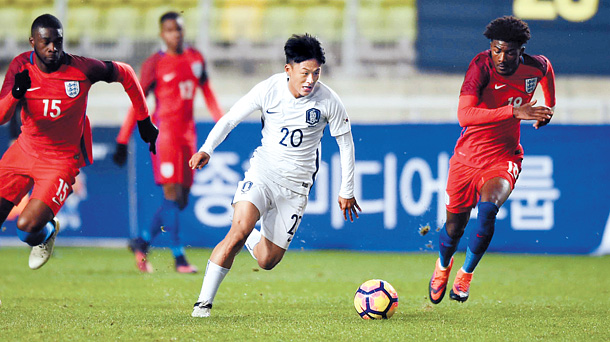 Lee Seung-woo dribbles past English players during the Suwon Continental Cup earlier this month. For Shin Tae-yong, the new skipper of the U-19 team, how he utilizes talents such as Lee will decide the outcome of the youth World Cup next year. [NEWSIS]

Ex-Olympic football head coach Shin Tae-yong has taken the helm of the U-19 national team, and the former national midfielder will lead the squad next year into the FIFA U-20 World Cup, which will take place here in Korea. But before the youth World Cup starts in May, Shin has some tasks ahead, such as trying to figure out how to get the most out of the “Barcelona Trio” - Lee Seung-woo, Paik Seung-ho and Jang Gyeol-hee.

After An Ik-soo stepped down from the post last month, Jung Jung-yong has overseen things, leading the youth team to win the 2016 Suwon Continental Cup. The Suwon Cup is an international friendly competition, where Korea hosts U-19 teams from Iran, England and Nigeria.

During the press conference on Tuesday at the National Football Center in Paju, north of Seoul, Lee Yong-soo, the head of the technical committee of the Korea Football Association said their choices had been narrowed down to Shin or Jung. Shin was eventually selected on the basis of his proven leadership in a big international tournament.

One of the criticisms An received while he held the youth team post was that he failed to take advantage of players such as Lee, who currently plays for FC Barcelona Juvenil A, the U-19 team of La Liga’s elite club Barcelona. As a young rising star whose moniker is “the Korean Messi,” Lee is considered perhaps the best talent Korea has in his age group.

The Korean wunderkind already gained recognition when he broke Lionel Messi’s record after scoring 39 goals in just 29 games for Barca’s Infantil A team at the age of 13. But during the Asian Football Confederation U-19 Championship this October, Lee was nowhere to be found and Korea couldn’t make it out of the group stage. This eventually led to An’s resignation.

But An’s replacement, Jung, exploited Lee and Paik - another Korean in Barca’s development program - to the full extent, eventually winning the Suwon Continental Cup with a perfect record. Lee and Paik scored one goal each during the tournament.

Along with Lee and Paik, Jang also plays for Barca’s youth team and many consider the trio the future of Korean football.

The new skipper is well aware of their talent and how important it is to employ them to boost the team’s competitive edge. “When I oversaw the Olympic team, it came up,” Shin said during the press conference. “But there was a notable gap in terms of age between them and the U-23 team, so I decided maybe instead of moving up a class, it would be better for them to stay in their age group. But now, I get to coach them in their proper age group. I’ll call them up and see how they mingle with the team and my coaching style.”

Shin often tries to implement fast-paced, offensive tactics, and to accomplish this, he needs agility and mobility up front. Considering his style, the “Barca Trio,” who all play offensive positions, may be his most suitable option. But Shin said, “I have my standards and color,” insinuating that he will see them in action personally before deciding to bring them onboard.

Despite the depth of experience Shin has in his pocket, he has yet to manage a youth team, which raised concern among KFA officials during their screening procedure. Many were worried whether there will be any communication issue between the coach and players.

“Other than my job in the national team,” said Shin, “I work with youth teams in Australia. So I think I have some understanding of coaching young players. But I guess they’re different than the pros. I’ll have to get some advice from my predecessors.”

For Shin, who has had a near-flawless managerial career since he hung his boots up about a decade ago, taking on the youth team at this juncture is risky business, and with only about six months before the youth football competition, it’s questionable whether he has enough time to get the team fully geared up. But Shin says he sees this as an opportunity to boost his potential as a manager.

“When I first took over the Olympic team, we couldn’t even guarantee that the team would go past the group stage,” said Shin. “But I had confidence in myself. And with that experience, I will do my best to come out with a good result [in the World Cup]. Of course, bad results may lead to devaluation of my worth, but I shouldn’t fear that. The higher the risk, the higher the possible return.”

He added, “We will play exciting, offense-centered football [in the U-20 World Cup]. The entire nation was exuberant during the 2002 World Cup. This time, we are the only host of the World Cup. We will have to be cautious not to get too hyped up before the tournament. We have some international event before then, including the JS Cup (a youth cup sponsored by former Manchester United player Park Ji-sung). We’ll have to set our goal after these events. But our goal will be more or less set by next March.”