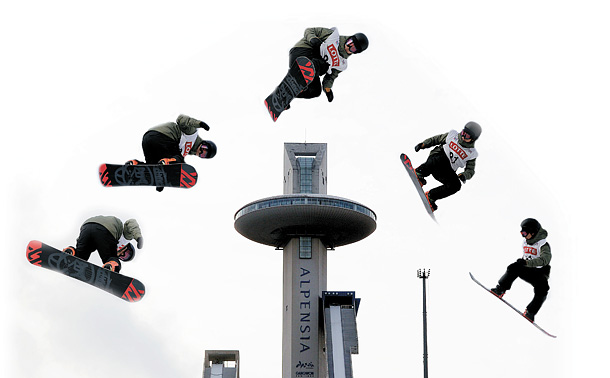 A snowboarder leaps into the air while practicing for the FIS Snowboard World Cup, a test event that starts today at the Alpensia Ski Jumping Centre in Pyeongchang, Gangwon. [NEWSIS]

The FIS Snowboard World Cup 2016-17 comes to Korea this weekend as a test event, the latest initiative by the PyeongChang Organizing Committee for the Olympic and Paralympic Winter Games (Pocog) to demonstrate their readiness for the upcoming 2018 Winter Olympics.

The International Ski Federation competition will showcase big air, an event to make its official debut at the Winter Olympics in 2018, from today until tomorrow at the PyeongChang Alpensia Ski Jumping Centre in Pyeongchang, Gangwon, a ski resort town 126 kilometers (78 miles) east of Seoul. The showcase event this weekend is the second snowboard competition to be held in Pyeongchang. Earlier this year, Pocog hosted slopestyle and snowboard cross events at Bokwang Snow Park, another venue for the coming Winter Games.

“A total of 56 male and 39 female athletes are competing from 23 nations this week,” said the organizers in a release. “Canada and the United States have the highest contingent at 20 each, followed by New Zealand with 11 and Japan with 10.”

Notable stars to be spotted in Pyeongchang this weekend include Mark McMorris, Max Parrot and Sebastien Toutant, a trio from Canada, all of whom are X-Games multi-medalists. Lee Min-sik, a homegrown snowboarder here in Korea, will also see some air this weekend at Pyeongchang, alongside athletes from around the world.

Lee, a 16-year-old up-and-comer in the sport, is the winner of the Korea Nation Cup this year. He is likely to represent the country two years later, looking to reel home a medal from an event where Korea has yet to tally any accolades. So far in the Winter Olympics, Korea has earned medals in only three events - short-track speed skating, speed skating and figure skating.

“We are delighted to welcome athletes here to Pyeongchang this week for the FIS Snowboard World Cup,” said Lee Hee-beom, the head of Pocog. “Big air is an exciting new event that will debut at the Games in 2018 so it is very exciting for spectators and viewers around the world to get a sneak preview at Alpensia this week.

“Most importantly, this is a wonderful opportunity for athletes and officials to experience the venue and PyeongChang ahead of the 2018 Olympic Winter Games,” Lee added. “We aim to use this week as an important learning experience for staff across all our functional areas to ensure that we deliver the best competition for everyone involved next year. We wish all those competing the very best of luck and hope they enjoy their time with us in PyeongChang.”

The test event comes to Korea amid a growing scandal involving President Park Geun-hye and her confidante, Choi Soon-sil, who is said to have been the power behind the throne. Choi and her niece, Chang Si-ho, are suspected of having profited from various deals made in the Olympic preparation process.

After this weekend’s big air event, Pocog will host ISU World Cup Short Track 2016 next. The short track competition will take place from Dec. 16 to 18 at Gangneung Ice Arena in Gangneung, Gangwon.