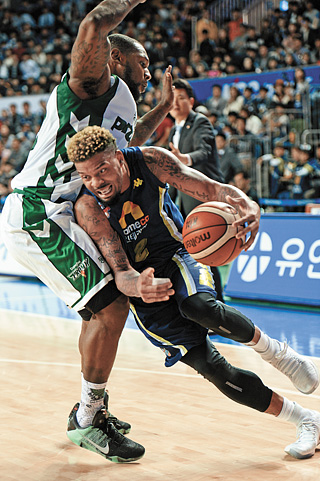 Andre Emmett, ace guard of the Jeonju KCC Egis, is back on the court, ready to rescue his team, which has fallen to the bottom of the league.

Emmett, who averaged 25.72 points last season and helped his team to take the regular season title, has been sidelined after playing in just two games earlier this season due to groin injury. And his absence took a heavy toll on Egis’ performance in the league, especially in terms of offence.

Since Emmett stayed out of the court, the Egis only clinched two wins, averaging just 76 points per game. Emmett amassed 1,389 points last season, the most points scored by a single player during the season.

In addition to Emmett’s injury, the Egis are also without their starting point guard and center. Both point guard Chon Tae-poong and center Ha Seung-jin have suffered season-ending injuries.

But with Emmett back in the game, skipper Choo Seung-kyun may have a shot at turning things around as his presence will add the fire power that the Egis lacked thus far.

Who will become the top club in Asia this year? It will be decided tomorrow when Jeonbuk Hyundai Motors travel to the United Arab Emirates (UAE) to take on Al Ain FC in the second leg match of the finals in this year’s Asian Champions League (ACL).

During the first leg match, which took place on Nov. 19, the K-League Classic club edged Al Ain at home in Jeonju, North Jeolla, by 2-1. It was the club from the UAE that initially took the lead of the game, breaking the deadlock of the match after the interval. But Choi Kang-hee, Jeonbuk’s skipper, shuffled the deck and bolstered the team’s firepower by putting in Lee Dong-gook, a 37-year-old veteran forward and former ACL top scorer and MVP in 2011. It was a brilliant move, and Lee combined his effort with Jeonbuk’s target man, Kim Shin-wook, at the front to pave the way for their Brazilian teammate, Leonardo Rodrigues Pereira, to score two goals and win the match.

As for Al Ain, who won the ACL in 2003 when the league was first inaugurated, they will do whatever they can to add another trophy to their shelf. The Emirati club finished as the runners-up in 2005, but since then, they’ve had no luck in advancing to the finals of the ACL.