Wang named Rookie of the Year after his maiden season

Wang named Rookie of the Year after his maiden season 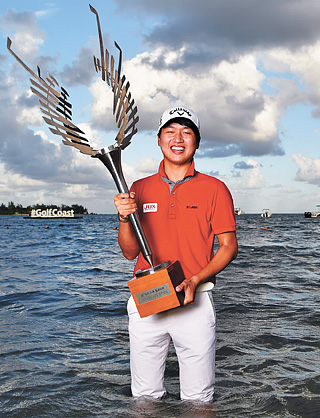 The European Tour made the official announcement on Wednesday that Wang, a 21-year-old golfer from Seoul, was awarded the Sir Henry Cotton Rookie of the Year title, capping his first season in Europe where he grabbed two titles earlier this year. Although he faced fierce competition with Li Haotong of China and Lee Soo-min, Wang’s compatriot, putting up a fight in the race, the Korean golfer pulled ahead of the competition eventually after solid performance towards the end of the season.

After his dramatic victory at the Trophee Hassan in Morocco on May 8, during which he claimed the title after two rounds of playoffs, the golfer went 69-70-71-72 to aggregate 6-under 282 on May 15 at the Four Seasons Golf Club in Anahita, Mauritius, lifting another trophy from the Tour.

Wang turned pro at age 16 after sweeping titles from junior leagues and amateur tours in Korea and the Philippines. Starting out his career at the PGA Tour China, Wang topped the official money rankings in his debut season. He won his first pro title there in 2014 at the Mission Hills Haikou Open.

This year at the Rio Summer Olympics, where golf returned as an official medal event for the first time in a century, Wang donned the Korean uniform and played alongside An in Brazil, coached by Choi Kyung-ju. Choi, arguably the most successful professional golfer out of Asia, praised Wang for his power and helped him hone his short game.

“I didn’t even think about winning Rookie of the Year until the Turkish Airlines Open when Haotong Li finished second, so it is nice to finally make it,” Wang was quoted as saying by the European Tour report. “I’m the second Korean to win this award and I’m so proud. I’ve not spoken to Ben (An’s English name) yet about winning it, but maybe after this I will.

“I still can’t believe how this year has gone,” he added. “I want to keep improving and learning in the big tournaments and from the great players. Playing on the European Tour has been a great experience for me. Next year? I want to win more than twice maybe.”