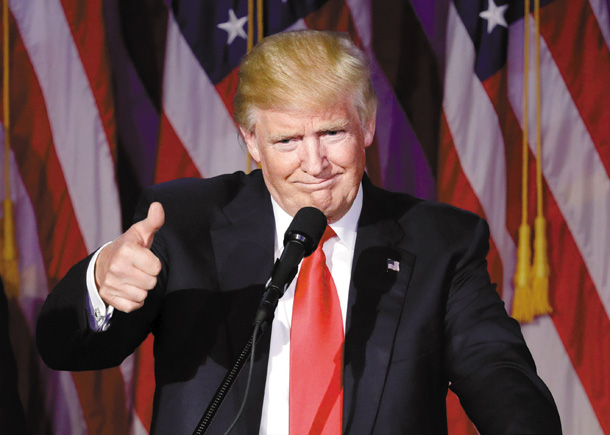 Here’s a suggestion for what should be among President Donald Trump’s priorities in Asia: Negotiate a free-trade agreement with China.
You may think I’ve lost my mind. Hasn’t trade with China cost jobs and weakened U.S. industry, as Trump relentlessly argued during his campaign? Wouldn’t a free-trade pact only make matters worse? And isn’t the U.S. trade deficit with China already large enough?

What all these arguments ignore is that China’s economy is changing quickly. Access to its market is becoming more and more critical for American companies. And a free-trade deal — far from harming U.S. businesses — would make them much more competitive in the economy of the future.

For many years after it undertook market reforms starting in the late 1970s, China’s economy advanced based on external, not domestic, demand. Although most Chinese were poor and couldn’t afford to buy much, they were willing to work long hours in factories for a fraction of the wages a U.S. worker would earn. That transformed China into a base for the assembly of all kinds of stuff, from clothing to iPhones, that then got exported to consumers in richer countries.

Today’s China looks very different. After decades of rapid growth, it is no longer a nation of poverty-stricken shop-floor workers. Gross domestic product per capita has surged more than 20 times in the past quarter century, to $8,141 in 2015. China’s shoppers now rank among the world’s biggest spenders.

Its retail market is expected to surpass the U.S. for the first time in 2016. Its customers are a key source of new growth for American companies. General Motors sells more cars in China than it does in the U.S., while Apple gets roughly as much revenue from Greater China as from Europe.

And China’s consumers are just warming up. By one estimate, the Chinese middle class will reach 1 billion people by 2030. That means these wealthier Chinese will become more important to the global economy than American shoppers. One study estimates that by 2030, China will account for 18 percent of global spending by the middle class, compared to 7 percent for the U.S.

For American companies, tapping these new consumers could be a boon. Apple Chief Executive Officer Tim Cook has cited China’s growing middle class as a reason to be optimistic about his company’s future. Starbucks CEO Howard Schultz said recently that he plans to open 2,500 new coffee shops in China over five years. Boeing estimates that China will purchase more than $1 trillion worth of new planes over the next two decades to serve its growing middle class.

The big question is whether American companies will ever have fair and free access to those shoppers. China’s policy makers have placed restrictions on all kinds of U.S. products, from the number of Hollywood films shown in Chinese theaters to the amount of chicken served on Chinese dinner tables. They also promote local companies over international competitors through subsidies and other support.

That’s why it should be a priority for the U.S. to pry open China’s markets and push for fairer treatment.

The U.S. government has already been negotiating a bilateral investment treaty, which would help achieve those goals, and the Trump administration should pursue its completion.

But Trump should go further, and consider a full-fledged free-trade pact. A 2014 study by the Peterson Institute for International Economics figured that such an agreement could help double American exports to China and create 1.7 million new jobs in the U.S. over 10 years. It could also forge better relations between the world’s two largest economies, and encourage cooperation on issues ranging from climate change to the South China Sea.

China might well be receptive to such a deal. President Xi Jinping has lately been talking big about opening China’s doors to foreign business, and promoting his own pan-Pacific free-trade pact. He understands that better access to foreign markets is ultimately in China’s self-interest. And perhaps more crucially, the Peterson study argues that a free-trade pact with the U.S. would help China improve productivity — which it badly needs to do if it wants to sustain healthy growth in the future.

It’s impossible to predict what Trump’s China policy will be, of course. The hardball tactics he discussed during the campaign, such as hiking tariffs on Chinese imports and labeling the country a “currency manipulator,” are much more likely to close markets than to open them. But there’s still reason for hope: Trump and his advisers have already been walking back much of his most inflammatory campaign rhetoric, and they’ve been pledging his administration to business-friendly policies.

It’s hard to imagine a deal that would do more to boost American companies over the long term than a trade pact with China. And if there’s one thing Trump has been consistent on, it’s his belief in the art of the deal.