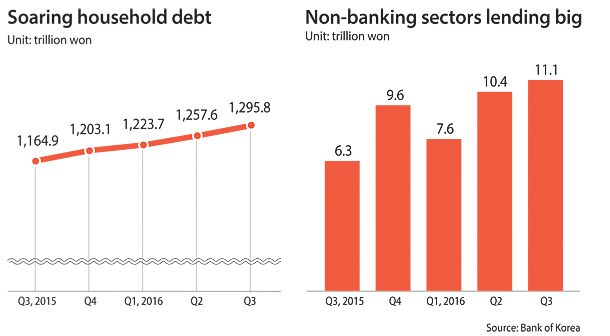 The country’s financial regulator will intensify scrutiny of lending practices by requiring banks and other lenders to have so-called group mortgage loans be paid in installments, the latest measure in a series of efforts to curb the rise in household debt and speculative investment in properties.

Group loans are offered to groups of borrowers looking to buy a number of units in newly built or redeveloped apartments. Financial institutions offer lower interest rates on them than individual mortgages to attract groups of borrowers.

The Financial Services Commission said Thursday that starting in January, those who apply for such loans should pay back the remainder of their mortgage balance in installments after the midsettlement stage.

“Potential buyers of apartments being sold after Jan. 1 will be subject to the new regulation when they settle the remainder of their mortgage,” said Doh Kyu-sang, head of the commission’s financial policy bureau.

He added that midsettlement, often 60 percent of the housing purchase, need not be paid back in installments.

Although the number of group mortgage loans has grown rapidly in recent years, they have come with looser underwriting rules than standard mortgages. Now, alongside the installment requirement, groups of borrowers must also submit documents containing proof of income. The banks will then assess the ability of the groups to fulfill debt obligations using additional data such as national insurance payment.

Various financial institutions including banks, credit cooperatives, insurance companies and savings banks (which cater to low-income, bad-credit borrowers) will have to abide by the new rules.

Credit cooperatives such as Nonghyup Bank and Suhyup Bank, which are often used by farmers and fishers, will be required to integrate other measurements to properly evaluate repayment ability since their income structure tends to differ from other salary earners.

The financial regulator refrained from projecting an immediate effect of the new measures. “We expect that the tangible effect can be seen after 2019, given that the remainder payments will take place in arrears, usually 24 months to 26 months after the purchase,” Doh said. “After 2019, the [installment] measure will translate into the debt reduction of 1 trillion won [$850 million] every year.”

The Financial Services Commission will also embrace the debt service ratio as a reference for debt repayment evaluation. The ratio compares income with debt and is benchmarked to decide whether to extend credit. If a borrower has too high a ratio, financiers are encouraged to reduce the loan size.

The new measures are a follow-up to regulations announced on Aug. 25 aimed at reducing housing supply built by state-run developers. The previous regulation had also taken aim at group mortgage loans, as guarantees by the Korea Housing and Urban Guarantee Corporation were lowered from 100 percent to 90 percent. The number of loan guarantees allowed per individual was also reduced from four to two.

While the regulator is preoccupied with debt-reducing efforts, household debt levels show no sign of abating, having reached nearly 1,300 trillion won in the third quarter, according to the Bank of Korea on Thursday.

The central bank said that overall household debt stood at 1,295.8 trillion won between July and September, up 11.2 percent or 130.9 trillion won from the same period last year. The figure marked a record high since the bank began tracking the data in its current form in 2002.

Given that October’s monthly increase of lending alone amounted to 7.5 trillion won, the debt level has already surpassed the 1,300 trillion won mark.

The main culprit of the rise was non-banking lenders including credit cooperatives. Loans offered by non-banking financiers reached a record high in the third quarter as the quarterly increase hit 11.1 trillion won. Loans made by banks increased by 17.2 trillion won, rising 2.9 percent from the previous quarter.

“Financial companies such as credit cooperatives have relatively lenient underwriting standards compared to other financiers,” said Lee Seong-yong, head of the Bank of Korea statistics bureau. “This led more people to turn to them for loans.”