HMM struggles to turn around

HMM struggles to turn around 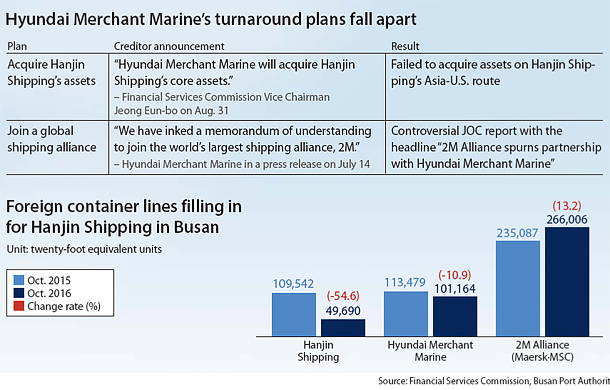 After the fall of Hanjin Shipping, once the nation’s top container line, the Korean government and creditors turned to rival Hyundai Merchant Marine (HMM) as a possible successor to be the nation’s flagship shipping line, but progress has been slow, raising concerns that Korea’s shipping industry may just collapse altogether.

It all started on Friday, when the American trade magazine Journal of Commerce reported that 2M, a global alliance of shipping companies, had spurned a partnership with HMM, based on a confirmation from Maersk Line, which leads the alliance.

HMM disputed the report, saying that “joining 2M is under discussion and will be concluded shortly.” The Journal of Commerce report, though, was enough to shake the nation’s confidence in the shipping line’s prospects of joining the alliance.

Joining 2M is crucial to the survival of HMM, especially as the global shipping market is suffering from a lack of orders and overcapacity. 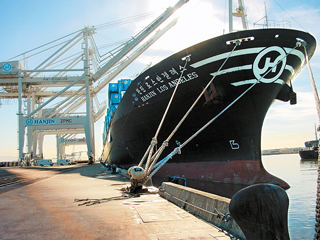 While an alliance usually refers to the sharing of shipping networks or vessel space through joint operation of routes, Maersk said it is looking at other cooperation possibilities such as inking slot purchase agreements, which means HMM can buy out slots of Maersk’s vessels to load cargo. This spurred speculation that HMM’s hopes of joining 2M could fall through.

“A slot purchase agreement could be a form of cooperation, but joining the alliance is our priority and the talks are expected to be finished by December,” an HMM spokesperson said.

HMM’s creditors, including Korea Development Bank, claim the recent reports regarding Maersk are part of a strategy by the Danish shipping line to gain an upper hand in negotiations. Regardless of the dynamics at play, Hanjin’s downfall and HMM’s current struggle is symbolic of the Korea’s shipping industry’s fallen reputation.

When a memorandum of understanding was inked in July for HMM to join 2M, it was expected that HMM would benefit the alliance as a major competitor to Hanjin Shipping, a big rival on the Asia-U.S. route. But now with Hanjin gone, HMM will only add 2 percent capacity to 2M’s trans-Pacific operations, according to U.K.-based research firm Drewry, meaning less merit for the alliance to take in HMM.

“The Korean government, creditors and HMM have been played at the hands of Maersk, as they have been too dependent on the lifeline thrown at them,” a source in the shipping industry said. “It’s all interconnected, from the fall of Hanjin and HMM to the collapse of Korea’s business in the Port of Busan.”

Even though the government and creditors billed HMM as the destined successor of Hanjin’s core assets on its Asia-U.S. route, the company failed to acquire them. Instead, bulk carrier Korea Line Corporation will inherit the Hanjin route’s shipping networks, workforce and seven overseas subsidiaries. An affiliate of merger and acquisition specialist SM Group, Korea Line had bid a higher price of 37 billion won ($31.3 million).

While HMM is struggling to turn itself around, orders that Hanjin used to handle are being snatched up by foreign companies. According to data from the Busan Port Authority, the amount of transshipment cargo handled by Korean shippers at the port declined while presence of the largest foreign player, the 2M Alliance, grew last month. The number of transshipment containers handled by Hanjin Shipping took a whopping 54.6 percent nosedive compared to last year, and HMM lost 10.9 percent. Meanwhile, transshipment containers handled by 2M grew 13.2 percent.

Transshipment refers to cargo unloaded from a ship and then transferred to another ship for further delivery. As there are additional costs to unloading, loading and procuring cargo during the process, its value is usually twice that of general cargo.

Some experts say the government and creditors must come up with innovative ideas to transform and save the nation’s ailing shipping industry.

“We have to find a new paradigm in the shipping industry different from that of overseas shipping giants like Denmark’s Maersk,” said Jeon Jun-su, a business professor at Sogang University. “Korean shippers should form a new ‘business class’ by building high-speed, high-efficiency and eco-friendly ships to deliver cargo and walk away from the endless price wars led by giant competitors.”