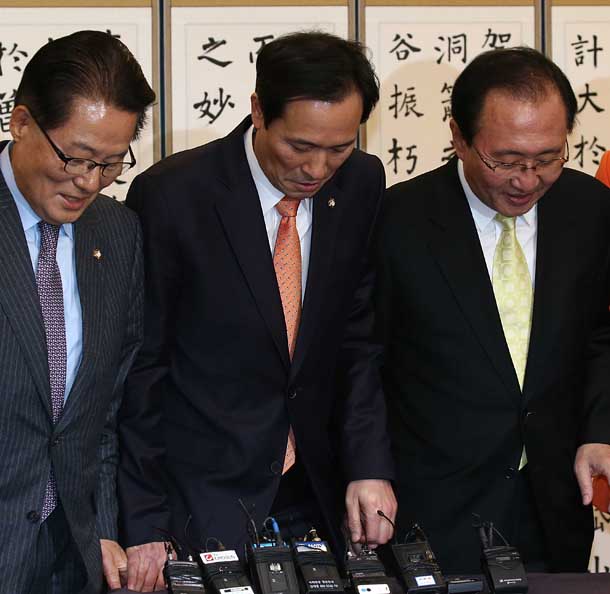 Floor leaders of three opposition parties gather in the National Assembly on Thursday. From left, Park Jie-won of the People’s Party, Woo Sang-ho of the Minjoo Party of Korea and Roh Hoe-chan of the Justice Party. [OH JONG-TAEK]

A timetable for the impeachment of President Park Geun-hye was presented by the main opposition party Thursday, and a vote on an impeachment motion could come as early as next week.

“We will make sure it will be voted on at a plenary session on Dec. 2 at the earliest or Dec. 9 at the latest,” Rep. Woo Sang-ho, floor leader of the Minjoo Party of Korea, said Thursday at a party meeting. “We will reduce all uncertainties and make a predictable political schedule.”

The Minjoo Party also decided that it will accept the scenario that Prime Minister Hwang Kyo-ahn will serve as acting president after Park is impeached. Initially, the party did not want Hwang, a key associate of Park, to oversee the government in the crucial months possibly leading up to the next presidential election.

Following a series of allegations that Park’s friend Choi Soon-sil acted as a power behind the throne, the prosecution conducted a special investigation and concluded that Choi and Park conspired in a massive power abuse and influence-peddling scandal. The prosecution indicted Choi and two former Blue House aides on Sunday and named Park a co-conspirator in most charges, including coercing tycoons to pay huge donations to nonprofit foundations. Park, however, was not indicted because of the presidential immunity afforded by the constitution.

Three opposition parties as well as some political heavyweights in the ruling Saenuri Party vowed to impeach Park based on the prosecution’s conclusion. Once an impeachment is passed by the legislature, Park’s presidential authority will immediately be suspended. The prime minister will serve as an acting president while the Constitutional Court deliberates on the legality of the impeachment. The court has up to 180 days to make a ruling.

Woo said he respects the argument that Hwang is a Park associate and it is undesirable for him to be acting president. “But we can’t be greedy in order to concentrate our power on the impeachment,” Woo said. “We will no longer consider recommending a new prime minister.”

The People’s Party supported Woo’s idea. “Now that some figures in the Saenuri Party say they will also propose an impeachment motion,” Rep. Park Jie-won, acting head of the People’s Party, said, “the four parties should each make a draft and combine them into a joint motion.”

A group of Park adversaries in the Saenuri Party also conducted a signature drive Thursday through phone calls and secured more than 40 lawmakers’ support for impeachment. The group, which calls itself the crisis management council, was formed earlier this month in protest of the Saenuri leadership controlled by Park loyalists.

The three opposition parties and liberal independents currently occupy 171 seats in the 300-member National Assembly. It requires at least 200 votes to pass an impeachment motion.

Rep. Yoo Seong-min, an icon of resistance against Park and a member of the council, said Thursday he will support impeachment. “If you read the charges against President Park, Choi and other associates stated in the indictment papers, you will find clear grounds for impeachment,” he said at a special lecture hosted by the Daegu Chapter of the Saenuri Party. Daegu is the political home turf of Park.

Rep. Kim Moo-sung, former Saenuri Party chairman and a member of the council, said Wednesday he will start an initiative inside the ruling party to impeach Park.

Yoo attacked Moon Jae-in, former chairman of the Minjoo Party, for making political calculations instead of pushing forward the impeachment. “The Saenuri Party’s lawmakers will each make a judgment based on their consciences,” he said. “We have no intention to be manipulated by Moon’s arrogant strategy.”

Yoo also urged Park loyalists in the Saenuri leadership to step down immediately to salvage the sinking party. He, however, said he won’t personally abandon the party.

“Quitting is easy,” he said. “It is far more difficult to stay put and have a fierce fight to restore a conservative party that is being condemned by the entire nation. It is hard, but we must do it.”

In addition to the impeachment process, the National Assembly is preparing an independent counsel probe of Choi-gate and a parallel parliamentary investigation.

If Park refuses to make a selection by challenging the candidates’ political neutrality, there is no way to force her. The Minjoo Party said if she does, she will just give them one more reason to impeach her.

The National Assembly will start its own investigation into the scandal on Wednesday. On Dec. 5 and 6, heads of eight conglomerates, which made large donations to the foundations at the heart of the criminal charges, will testify at the hearings. So will presidential friend Choi.