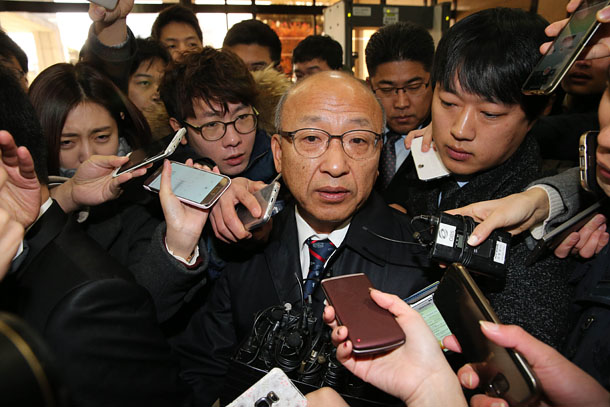 Moon Hyung-pyo, former minister of health and welfare, appears at the Seoul Central District Prosecutors’ Office on Thursday to answer questions regarding allegations he was pressured by the Blue House to get the National Pension Service to approve a merger between Samsung C&T Corp. and Cheil Industries last year. [NEWSIS]

Prosecutors raided the headquarters of Lotte, SK, the Ministry of Strategy and Finance as well as the Korea Customs Service (KCS) on Thursday to investigate whether the Blue House pressured the customs authority to issue duty-free licenses to companies in return for their donations to two foundations allegedly controlled by controversial presidential friend Choi Soon-sil.

Documents and computer hard disks were confiscated from at least 10 different locations as prosecutors searched for evidence that President Park Geun-hye pushed the KCS to allow Lotte and SK to open duty-free stores at the end of this year. In Nov. 2015, the companies failed to renew their licenses for duty-free stores at Lotte World Tower and at the Sheraton Grande Walkerhill hotel.

In April, the KCS jointly announced with the Ministry of Strategy and Finance and the Ministry of Culture, Sports and Tourism that it would give new duty-free licenses to three conglomerates and one smaller company. Applications were accepted in May and June. Lotte and SK publically welcomed the gesture.

The winners of the licenses haven’t been announced yet. The KCS will reportedly push forward with its original plan to disclose the winners next month.

Prosecutors digging into the Choi-gate scandal surmise that Park and Choi pulled some strings.

Prosecutors suspect she pressured the tycoons to make contributions to the Mi-R and K-Sports foundations, allegedly controlled by Choi, which amassed a hefty 77.4 billion won ($65.5 million) in a few days after they were launched.

Authorities have so far discovered that SK donated a total of 11.1 billion won through several of its affiliates, while Lotte gave 4.9 billion won. The foundations are suspected to be slush funds intended for the president after she leaves office in February 2018.

If prosecutors prove that the president meddled in the duty-free licensing process, it would mean she committed third-party bribery, which carries a minimum 10-year jail sentence.

Prosecutors who have been digging into Lotte’s corporate practices since early this year reportedly shared information with their colleagues investigating Choi-gate.

The key focus of the earlier investigation, which has yet to wrap up, is whether Lotte created slush funds through financial transactions of its affiliates, and if so, where the money was funneled and to whom.

Authorities suspect that money was pocketed by Lotte executives.

Choi Kyung-hwan, former deputy prime minister for the economy and a loyalist of President Park, denied allegations that he personally met with top Lotte officials for the duty-free license bid, saying in a press release Thursday that he was never involved in the process and contacted nobody from any company.

The raid on Lotte and SK came a day after prosecutors raided the National Pension Service and Samsung’s strategic planning office as part of an investigation into whether Park coerced the public pension fund to approve a merger at the country’s largest conglomerate last year.

The pension fund, which was the largest stakeholder of Samsung C&T, approved a merger with Cheil Industries, another Samsung affiliate, despite the concerns of analysts that the value of its stake in the merged entity would fall by hundreds of millions of dollars.