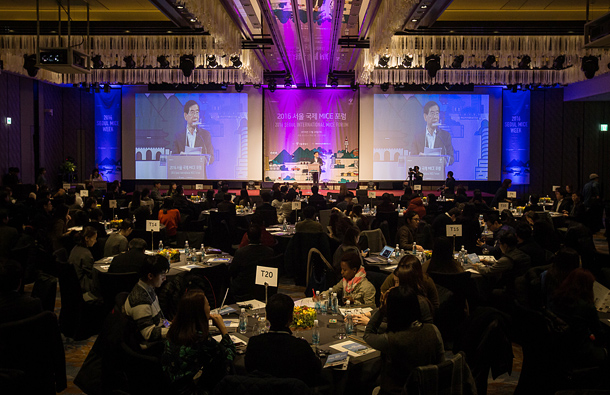 Seoul Mayor Park Won-soon vowed to push forward efforts to make Seoul the best city in the world to host international meetings and conventions while addressing an audience at the Four Seasons Hotel in central Seoul on Thursday to discuss the state-led Meetings, Incentive Travels, Conventions and Exhibitions and Events (MICE) initiative.

“The Union of International Associations (UIA) named Seoul the third-best destination for global congresses in 2015,” Park said. “The city shall not stop until it becomes No. 1.”

The association ranked Korea second in the world for global congresses last year, when Korea held 891 meetings, a 40 percent jump from the year before, according to the UIA. Gathering under the theme, “Future MICE Trend: Sustainability,” experts and professionals committed to promoting sustainable and innovative events discussed the future of MICE industries and strategies for Seoul.

“Seoul has been doing great at selling Seoul, selling the experience, selling the gastronomy and more,” said Oscar Cerezales, chief operating officer of MCI Asia-Pacific. “But now it needs to reinvent itself.”

He added, “Corporations and associations already know Seoul is fantastic. What we need to do is sell a business solution… Destination marketing is not about tourism but economic development - we’re talking about money here, money for restaurants, hotels, taxi drivers, for everyone. It’s not about convincing people to come and enjoy, it’s about making a powerful industry.”

Cerezales urged Seoul and other cities throughout the world to focus on improving events that are small in scale, because about 80 percent of MICE events are small, and because market growth is happening at small events, he said.

As the third international forum on the MICE initiative since 2014, the Seoul International MICE Forum on Thursday also heard from Fiona Pelham, the international chair for Meeting Professionals International, on sustainable events, and from Daan Van de Kamp, sales director at Westergasfabriek in the Netherlands, on venue revivals.

Under the MICE initiative, some 20,000 visited Seoul last year in incentive trips only, including 8,000 employees of the Nanjing Zhongmai Science and Technology Development Company of China, and 5,400 employees of the Guangzhou-based cosmetics company Aurance, who enjoyed a chicken and beer festival during their visit.

About 25,000 visitors also took part in the Rotary International Convention this year.

“Seoul is trying to be a top city to host international conventions,” Park said, “like building a mega-complex geared for the MICE initiative.”

Seoul city government plans to build a 1.66 million square-meter (410 acre) convention hub that connects the COEX Convention and Exhibition Center to the Hyundai Global Business Center, scheduled to be constructed from early next year in Samseong-dong, southern Seoul, to the Seoul Sports Complex in Songpa District, southern Seoul.