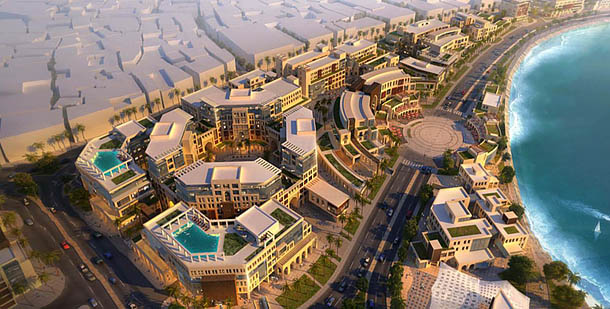 Aerial view of the Dubai project tourist complex in the coastal area of Deira. [SSANGYONG E&C]

The construction company won a $170 million construction contract with Investment Corporation of Dubai (ICD) to develop the coastal area of Deira into a tourist complex. ICD is Ssangyong E&C’s biggest shareholder. Ssangyong E&C will build a 24-story hotel, 14- and 16-story residences as well as four 10-story office buildings in the district of the Gold Souk, one of the United Arab Emirates’ largest gold markets.

In Singapore, the company secured a construction project from City Developments Limited, a subsidiary of Hong Leong Group, one of the largest private-run holding companies in Singapore.

The $82 million project includes building a condominium complex in Serangoon in the northeast region of the country. The complex will contain seven 14-story buildings that can accommodate 519 households.

In Equatorial Guinea, the company won a state government contract worth 30 billion won ($25 million). Ssangyong E&C moved into the African country in 2011 and has overseen 14 construction projects there, which are worth a total of $500 million.

So far, the company has advanced into 20 countries, carrying out 150 construction orders worth $10.2 billion. It operates 14 overseas branches and five foreign corporations.