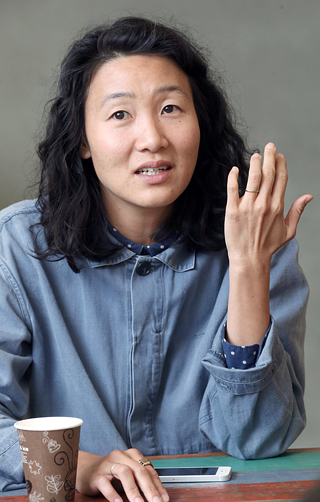 Lisa Sangmi Min, who studies North Korea at the University of California, Berkeley, says we need to widen our perspective to understand the North. [CHOI JEONG-DONG]

“The first time I met a Korean-Russian was in 2005 when I was on the Trans-Siberian Railway. Talking about the topics ranging from diaspora to independence fighters, the Soviet Union, socialist revolution and the space of North Korea, I realized that Korean-Russians generally have a wider perspective on North Korea,” said Lisa Sangmi Min, who studies North Korea at the University of California, Berkeley.

Min’s study focuses on North Korea, as well as its surrounding areas, including Central Asia. “Rather than concentrating on North Korea directly,” she explained, “I’m using a methodology called peripheral seeing.”

Min spent September and October in Cheorwon County, Gangwon, where the Military Demarcation Line is located, as part of Real DMZ (demilitarized zone) Project, led by Art Sonje Center in Seoul. She said, “There’s part of North Korea that can’t be felt in Seoul. [For example,] you can hear the North’s propaganda broadcasts toward the South from time to time, but sometimes you can’t.”

“Absent presence” is how Min terms such subtle existence of North Korea in the South. Min explained, “My studies of North Korea can be connected to what philosopher Maurice Merleau-Ponty wrote about phantom limbs, where soldiers with a lost limb experience sensations that the amputated limb is still attached. Last year, I stayed a night near the front lines, and the accommodation owner told me how she used to be scared to walk alone at night, thinking an unknown presence exists right behind the mountain. After she got used to the fear, however, she said she forgot about it like it did not exist, only to come back to it sooner or later.”

During her master’s program, Min studied Russian regional studies, focusing on the periods of Lenin and Stalin. She began her studies on North Korea in 2012. Since then, she visited the North on five separate occasions for tourism, academic exchange and to work as an English teacher. Min recounted, “I was a tourist at first because I wanted to visit North Korea to see if study was possible. I couldn’t ask questions to anyone I wanted, so I did have fears. You know how negative North Korea appears to be in American media. I carefully observed myself to find out how I feel about each moment.”

Min, who has also visited Dandong in China, plans to revisit Kazakhstan, where she received a master’s degree, to continue her study.

“Study of North Korea largely uses the division - country/resident, truth/false, reality/stage and public/individual. In this lens, North Korea and its people become very limited. I believe that we need to walk out of this frame to experience another facet of North Korea, which includes tension and paradox.”