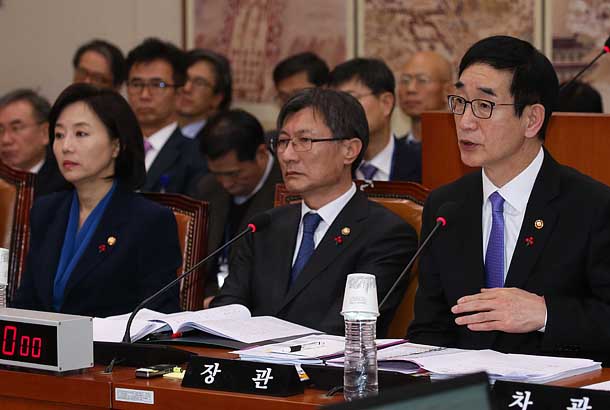 Lee Joon-sik, right, education minister and deputy prime minister for social affairs, answers questions from lawmakers of the National Assembly’s Education, Culture, Sports and Tourism Committee on Friday in the National Assembly. He was asked if the ministry will go ahead and use controversial state-authored history textbooks. The ministry plans to make the history textbooks public on Monday. [OH JONG-TAEK]

The Ministry of Education hinted at a possibility Friday that the controversial state-authored history textbooks project may be delayed or reconsidered.

Asked by Rep. Noh Woong-rae of the main opposition Minjoo Party of Korea if the ministry will go ahead and use the controversial textbooks, Lee said, “The Ministry and the National Institute of Korean History put efforts to create high-quality, proper history books. We are in search of a way to use the textbooks at schools.”

After the government went ahead with a highly contentious taking over of the writing of history textbooks in November 2015, liberal politicians, teachers and historians fiercely opposed the move. It was a signature issue of the Park administration, which is now imperiled by a grave abuse of power scandal.

The new government-authored history textbooks for middle and high schools are scheduled to be unveiled on Monday.

Under the current plan, e-books of the new materials will be posted on a website. A briefing is also scheduled to announce specific standards and authors. A team of 47 professors, researchers and middle and high school teachers participated in writing the new textbooks, but their names have been kept secret.

At the National Assembly hearing on Friday, Minister Lee said the new textbooks will be made public on Monday as planned. “And then we will listen to the people’s opinions,” he said. The textbooks are scheduled to be finalized in January next year and printed in February. They will be distributed to 6,000 schools around the country in March.

Although the ministry will give a month to the public to review the materials before they are printed, Cho Hi-yeon, head of the Seoul Metropolitan Education Office, made clear that his office won’t even bother looking at them.

Earlier in the day, some local media reported that the ministry decided to give up on the plan for forcing the use of state-authored textbooks and will allow teachers to use both the materials written by the government and private publishers. Later in the day, the ministry issued a statement saying, “No decision was made so far regarding the media reports.” It did not deny the reports.

Since an unprecedented abuse of power scandal involving President Park’s friend Choi Soon-sil engulfed the government in October, suspicions snowballed that Choi was behind the textbook project. The ministry started reviewing three plans to deal with the issue. The first plan was to use them as planned; the second option was handing over the thorny decision to the next administration. The third option was to allow schools to use both kinds of textbooks.

“We are aware that the public is not positive about the state-controlled textbooks,” an education ministry official told the JoongAng Ilbo. “We will make a decision after listening to various opinions, but nothing has been decided yet.”

It remains to be seen if Park will give up the government textbook project. “The Blue House won’t accept any change, because it thinks the state-authored textbooks are the president’s last bastion,” a source close to the administration told the Joongang Ilbo.