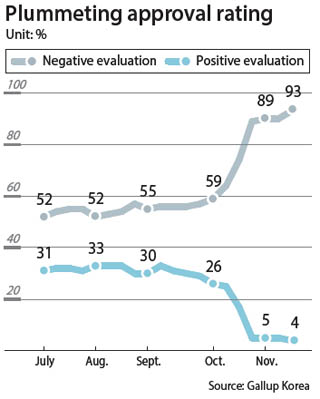 President Park Geun-hye apparently managed to dissuade her senior civil affairs secretary from leaving the Blue House as prosecutors continue to investigate her as a suspect in an ever-growing abuse of power scandal.

Following the prosecution’s conclusion that Park was a co-conspirator in the scandal, Justice Minister Kim Hyun-woong and Senior Civil Affairs Secretary Choi Jai-kyeong expressed their intentions to quit on Monday.

Kim said he thought it was “the right thing to do, considering the circumstances” through a statement from the ministry. Choi did not issue a statement on why he wants to quit.

“Park made a desperate appeal, and Choi ended up continuing his service,” a source at the Blue House told the media on Friday.

No official statement was made about Park’s decision to keep Choi as of 6 p.m. on Friday. According to the source, she is still trying to persuade Kim to stay, but he is adamant about resigning.

“It is a matter solely depending on the president’s decision,” Blue House spokesman Jung Youn-kuk said earlier in the morning. “When the president makes a decision, then I make an announcement. I cannot comment on the process or the meaning of her prolonged consideration.”

Kim was appointed to the post, which oversees the criminal justice system and other legal affairs of the administration, in July 2015. Choi was appointed on Oct. 30 and received his credential on Nov. 18.

Their resignations were submitted as the prosecution made clear it has no intention to go easy on Park as it investigates ever-widening accusations that her friend Choi Soon-sil committed various alleged crimes with the help of presidential aides ? and, according to prosecutors last Sunday, the president herself.

The prosecution formally pressed charges against Choi and two former presidential aides on Sunday. The prosecutors also said Park was a co-conspirator in most of the crimes, but they could not indict her because of presidential immunity guaranteed in the constitution. She can still be prosecuted for those crimes after she leaves office.

The president’s silence continued for the fifth day about the fate of her key aides. Many assume she is trying to persuade them to withdraw their resignations, which may not be easy.

“Their intentions to quit are too strong, and it takes time to persuade them,” a Blue House official told the JoongAng Ilbo.

As Park is facing an independent counsel probe of the scandal next month, she will need the assistance of her civil affairs senior secretary. Letting go of the justice minister is also unlikely, because finding a suitable and willing successor and going through a confirmation hearing at the opposition-controlled National Assembly are not easy.

The cabinet and the Blue House secretariat have been directly hit by the scandal. On Nov. 2, Park nominated Kim Byong-joon as the new prime minister and Yim Jong-yong as deputy prime minister for the economy in a vain attempt to defuse the crisis threatening her presidency.

Opposition parties refused to accept the nominations, and the cabinet reshuffle remains up in the air.

She also recommended Park Seung-joo, former vice minister of gender equality and family, as the new minister of public safety and security, but he gave up the nomination one week later. He found himself in controversy over the past week when it was revealed he took part in a shamanistic event earlier this year in downtown Seoul.

In his 2013 book, Park also claimed to have visited his “past life” 47 times. His appointment sparked claims that the president was trying to recruit another shaman-like figure into her government.

He was indicted last Sunday on charges of colluding with the president and coercing companies into making massive donations to two foundations. Three secretary posts occupied by Park’s longtime associates were also left vacant. Opposition parties said the situation clearly shows that the Park presidency is about to collapse. In addition to paralysis in the cabinet and Blue House, Park is also losing support of the ruling party.

Dozens of Saenuri lawmakers said they are willing to vote for the National Assembly’s presidential impeachment. And a new poll showed that Park’s popularity plummeted even further to 4 percent. Gallup Korea announced Friday that Park’s approval rating was 4 percent this week, down by 1 percentage-point from last week.

It is the lowest since the current five-year, single-term presidential system was introduced in 1988.

According to the poll, 93 percent gave negative response to her performance, up by 3 percentage-point from the previous week.