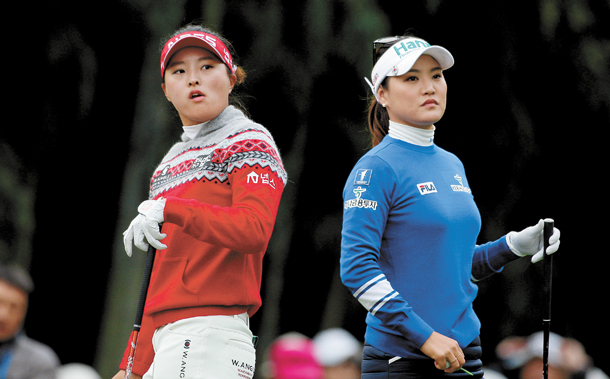 Ko Jin-young of the KLPGA, left, and Ryu So-yeon of the LPGA during the single-play match of the ING Life Champions Trophy Park In-bee Invitational on Sunday. Ko was selected the KLPGA MVP of the competition. [KLPGA]

Team LPGA won the ING Life Champions Trophy Park In-bee Invitational, a professional women’s golf tournament where players from the Korea-based tour face off against members of the U.S.-based tour.

The event took place over the weekend at Dongrae Benest Golf Club in the southeastern coastal city of Busan. The U.S. team claimed a dramatic come-from-behind victory over Team KLPGA with a final score of 13-11. While trailing by the end of the second round, the golfers from the U.S.-based tour combined efforts to tally eight points in the final round on Sunday alone.

The invitational is played as a team competition and is hosted by Park In-bee, a Korean LPGA Hall of Famer with one of the most decorated careers in women’s golf history. In addition to a career Grand Slam, she won a gold medal at the Summer Olympics. At the Park In-bee Invitational, top players from the LPGA and KLPGA compete for the trophy and a game purse worth 1 billion won ($850,000).

A total of 26 players from the U.S.-based tour and Korea-based tour, 13 each, participated in the tourney based on the Money Rankings of each tour.

Host Park In-bee, Kim Sei-young, Amy Yang, Ryu So-yeon, Kim Hyo-joo and Lee Mi-rim were just a few players from the LPGA spotted on the course on Sunday. Park In-bee was unable to play in the competition as she is still recovering from injuries that have nagged her all season, the latest being on her thumb.

From the Korea-based tour, this year’s KLPGA Player of the Year, Ko Jin-young, as well as other notable names such as Lee Jung-min and Bae Seon-woo were on the roster.

The first round of the invitational went to Team KLPGA. During Friday’s round, four pairs from the team routed their counterparts from the American tour. The pair comprising Ryu So-yeon and Baek Kyu-jung and the one including Park Hee-young and Chella Choi were the only groups from Team LPGA to earn points from the first day.

Team KLPGA extended their run into the second day on Saturday where they collected three more points. Ko, the KLPGA Player of the Year, looked especially impressive, unfazed even against LPGA stars like Amy Yang, and clinched wins from the first two rounds. Added to the score from the previous day, Team KLPGA led the competition 7-5 by Saturday evening.

Then came the final day, when the entire tournament was flipped around in a span of a few hours.

Team KLPGA started off strong on Sunday, with Kim Ji-hyun edging out Park Hee-young. But Kim’s win was one of only four that Team KLPGA managed to post on Sunday from the 12 matchups.

Team LPGA essentially secured their win when Kim Hyo-joo sunk the birdie putt at the 17th hole. Even if she missed the birdie at the next hole, the matchup between her and Lee Seung-hyun would have been all squared and Team LPGA would still win by a 0.5 margin. Kim Hyo-joo, though, did not lose focus and made another birdie at the 18th hole to give her team a complete victory by two points.

“I could see how much the KLPGA players have improved in comparison to last year,” said Park In-bee. “As a host, it was a great pleasure for me to see the players enjoying the sport.”

Ko, who went 3-for-3 during the tournament, was selected MVP for Team KLPGA, and Chella Choi, who was also undefeated, claimed the honor for Team LPGA.