Veteran Twin retires from field, but he’s not ready to leave

Veteran Twin retires from field, but he’s not ready to leave 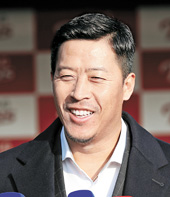 Lee Byung-kyu, a veteran hitter for the LG Twins, is retiring from the field. As a franchise star of the Seoul-based team, Lee hopes to remain a Twin and start the second chapter of his baseball career as a coach for his beloved club.

During a press conference on Friday announcing his retirement from playing, Lee, one of the Twins’ most celebrated stars, said he was hanging up his gloves to open doors for younger players to shine. “When better and younger players came along, that’s when I knew I had to retire.”

The 42-year-old outfielder began his career almost two decades ago in 1997 and played a total of 17 seasons while wearing the pinstriped uniform of the Twins. He left the Korean league briefly to take a crack at the Japanese league, where he played for the Chunichi Dragons from 2007 to 2009. During his stint in Japan, Lee batted .254 and posted 28 home runs and 119 runs batted in, a less than mediocre performance for a hitter who played in the Korean league for a decade.

The prodigal son eventually returned home, putting up nine home runs and 64 RBI while batting .290 in his first year back in 2010. Throughout his 17 seasons in the Korea Baseball Organization, Lee appeared in 1,741 games and batted .311, tallying 2043 hits, 972 RBI, 161 home runs, 992 runs scored and 147 stolen bases. As one of the most outstanding contact hitters of the league, he reached the career milestone of 2,000 hits during his 1,653th career game in May 2014, faster than any other player in the league to do so.

The 1997 Rookie of the Year also has seven Golden Glove awards, six as an outfielder and one as a designated hitter. “Frankly, I still think I have it in me to compete on this level,” Lee said. “I wanted to prove that age is just a number.”

Indeed, the numbers that Lee posted this year haven’t exactly been those of a player who should be calling it quits. Although he only played in one game in the top division, Lee played 47 games in the Futures League, the minor league of the KBO, where he batted .401 with three home runs and 29 RBI, a solid performance that demonstrates Lee still has things to offer on the plate.

Looking out at Jamsil Stadium during the press conference on Friday, Lee repeatedly said it was sad to think he wouldn’t be playing in the stadium anymore. “I stayed at the Future’s League this year because I wanted to come back to this place,” Lee said. “I wanted to try my bat again at this very place.”

“It would be a lie if I said I didn’t consider leaving the Twins and extending my career as an active player,” he said. “But the more I think about it, the more I realize I cannot leave the Twins. I felt it right for me to leave things behind here.”

For now, Lee will spend some quality time with his family. But the probability that he will be returning to the Twins dugout is high. For one thing, the club will support him in coach training, and Lee himself is determined to return to Jamsil. “I want to teach younger players about the things I learned over the years.”

Although there is no set timetable yet, Lee does have his own coaching philosophy. “I think communication between the coaches and players is vital,” Lee said.

The Twins have many of their franchise stars in their coaching staff, and if Lee comes onboard, there will be another familiar face for fans when the season comes around next March.