What Trump will mean for Asia

What Trump will mean for Asia 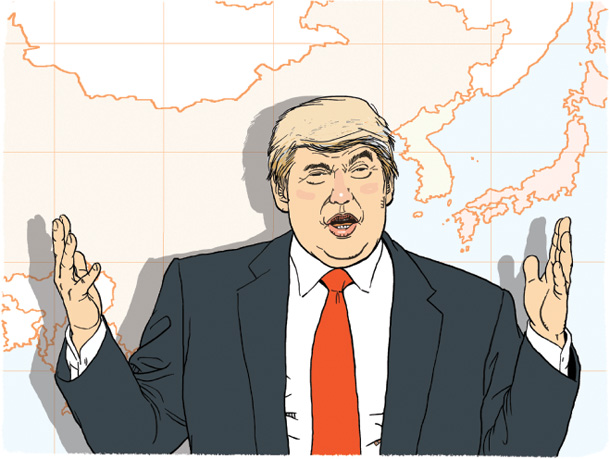 The preliminary choices for Donald Trump’s cabinet suggest the incoming administration could end up being as controversial as his campaign was and have added more worries about the world’s most powerful country heading decisively right.

One of his first picks was Steve Bannon, a notorious right-wing media executive, for chief strategist, giving him an edge over the more sane choice of chief of staff as he will serve most closest to Trump. Bannon has been a controversial figure for his racist and sexist comments. He champions antiglobalism and placing U.S. interests first.

Subsequent nominations have been equally contentious. For attorney general, Trump selected Senator Jeff Sessions of Alabama, a hardcore conservative who was once rejected by a Republican Senate for a nomination under President Ronald Reagan because of racist remarks. For the post of national security adviser, Trump has tapped Lt. Gen. Michael Flynn, an outspoken hard-liner against Islamist militancy. The president-elect made yet another conservative choice with Rep. Mike Pompeo of Kansas for director of the Central Intelligence Agency, adding to the aura of intolerance against any threat to national security and interests.

Sessions believes wiretapping and torture are justified in the war against terrorism. He is vehemently against Islamic militants and illegal immigrants. Flynn has made controversial remarks against Islam and thinks Washington should join hands with any state to combat terrorism. Pompeo has also been steadfastly against Islamic extremists and Iran. They have all been regarded as the extreme minority in the Republican Party.

The president-elect has tried to water down the hard-line color by mixing in moderates. Alongside the controversial Bannon, Trump announced mainstream party member Reince Priebus, chairman of the Republican National Committee, as his choice for chief of staff. He has met with better-known moderate names in the conservative party for secretaries of state and defense after naming three controversial figures to take charge of national security.

But regardless of his reach beyond his surrogates and supporters, the underlying hard-line tone on foreign affairs is evident.

Now that the team members are more or less in place, we need to decipher how they will work with the rest of the foreign policy apparatus: the State Department. Since the new tenants of the White House are a former corporate head and his loyalists, the command could be one-sided. A clash reaching the scope of the high-profile row between the neoconservatives of the Bush administration and Secretary of State Colin Powell is foreseeable. But since Trump won through a bitter campaign and extreme national divide, he could face constraints from Democrats, Republican moderates, mainstream media and the business community. Foreign policy could be shaped through checks and balances. Because of the inner dynamics’ unpredictable nature, we can only project a rough outline on future U.S. foreign policy.

When the United States places national interests first, the upside is that it will become less quarrelsome with China and Russia over geopolitical predominance. It will become less engaged in the affairs of other states. Washington could become less tense on issues regarding Ukraine, Syria and the South China Sea.

The downside is that even without American interference, China and Russia will continue to expand their influence. Affected countries will have to adapt to a new power order in the wake of a U.S. exit. U.S.-dependent states in the Middle East and Eastern Europe struggling to fight off Russian expansion could find themselves in the hot seat. The United States and Europe could clash over the role and cost of sustaining global order and peace. The longstanding alliance tradition between American and European powers could weaken. The hegemonic fight in Asia between the United States and China will also change. The United States could enter friction with other countries over trade and immigration issues.

The Korean Peninsula will come after the Middle East, Russia and China on the foreign policy priority list, given the makeup of antiterrorism hard-liners in the Trump administration. The businessman-turned-president will mostly be interested in commerce with regards to Asia. Washington will become testy on issues of trade, currency, intellectual property rights and e-commerce with Beijing. Conflict with Beijing over politics and security affairs will become trade-oriented. Japan and South Korea must find their new place in the paradigm change.

Washington will be able to work better with Beijing and Moscow on the North Korean nuclear issue. The United States will maintain sanctions and demand China do more and leave the door open for dialogue to solve the problem. But if its national stake is at risk, Washington could turn tougher.

South Korea may have to brace for pressure from Washington to take up the greater share of defense costs and military operation. It may also have to watch for a revisit of existing free trade agreement terms as well as trade friction between the United States and China. Many Koreans staying illegally in the United States could return home. If Washington turns outright nationalistic, anti-U.S. sentiment could escalate and could become a factor in the next Korean presidential election and next Blue House administration.

From the organization of the new White House administration and circumstantial conditions, the outlook for Korea-U.S. ties is not that bright. But there is still hope. Trump has not yet named his point man in charge of Asian policy. The new chief policymaker on Asian affairs could be relatively low-profile.

Since the more high-profile figures will be entirely engrossed in the affairs of other regions, we could work better with the new Washington policymakers on Asian affairs by befriending them. The diplomatic team should mobilize all their connections in the private and public sectors to influence policies favorable to our position. The age of Trump will be full of surprises and changes. We must be alert and precise in our judgment and response.


*The author, a former South Korean representative to the six-party talks, is a visiting professor of politics at Seoul National University.