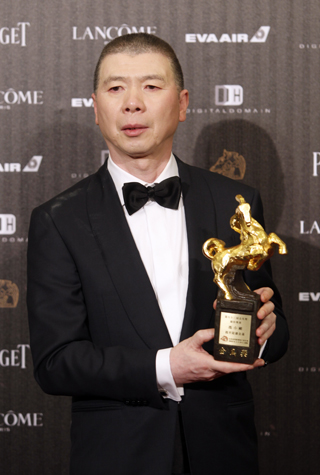 TAIPEI - Veteran Chinese director Feng Xiaogang picked up the best director award for his social satire “I Am Not Madame Bovary” at the 53rd Golden Horse Awards, considered the equivalent of the Oscars for Mandarin-language cinema.

Feng’s “I Am Not Madame Bovary” stars Fan Bingbing as a woman who spends a decade fighting China’s bureaucracy to have her divorce nullified after being swindled by her ex-husband.

Best feature at Saturday’s ceremony went to Zhang Dalei’s “The Summer Is Gone,” about a boy’s summer vacation in Inner Mongolia in the early 1990s set to the backdrop of shrinking jobs at state-owned companies during a time of economic reform. The film’s 10-year-old actor Kong Weiyi took home the best new performer award.

The two lead actresses in the romantic drama “Soul Mate” shared the best actress award. Zhou Dongyu and Ma Sichun played two best friends whose relationship is tested when they fall in love with the same man.

“Together we make a fantastic duo,” said Ma. “I would not be me without her, and she would not be her without me.”

Fan Wei won best actor for his performance in “Mr. No Problem” as the manager of a money-losing farm in Chongqing in the 1940s. Fan said he was grateful the jury had “perceived the subtleness I brought to the character.”