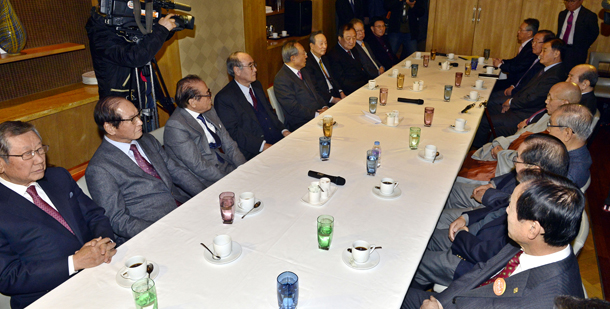 In what could be her last appeal to the nation before lawmakers vote to impeach her, President Park Geun-hye might give a third public apology for the political meltdown caused by an abuse of power scandal involving her friend Choi Soon-sil and plead innocent to implications of criminal behavior described by prosecutors, according to a source from the Blue House Sunday.

The source, who requested anonymity, told the JoongAng Ilbo that Park is mulling over making another apology some time this week or next to try to explain why she shouldn’t be forced out of office.

Another official from the presidential office told the paper that Park might actually accept “political and legal responsibility” over the snowballing crisis and press the National Assembly to “combine forces to overcome the national emergency.”

The exact timing of a third apology, which has yet to be decided on, depends on when lawmakers will vote for a presidential impeachment, both sources implied.

This week has been dubbed “the week of President Park’s greatest adversity” by local media, as the Blue House recognizes that the so-called Choi-gate scandal isn’t going away.

Today, the Ministry of Education is scheduled to publicly unveil controversial state-authored history textbooks, defying speculation that it might delay or cancel the plan to use them. In November 2015, the Park government went ahead with the decision to introduce its own history textbooks for middle and high school students, ignoring fierce opposition from liberal politicians, teachers and historians.

The prosecution has set Tuesday as their deadline for questioning President Park, and told her lawyer they want to meet her face-to-face before then. Park nor her lawyer have yet to respond. She has refused to be questioned so far.

On Wednesday, a legislative special committee that was formed to dig out the truth about Choi and Park will officially launch their activities by grilling officials from state organizations that were involved in the scandal: the Ministry of Justice, the Ministry of Culture, Sports and Tourism, the Ministry of Health and Welfare, as well as the National Pension Service.

The Supreme Prosecutors’ Office will also be asked to share information from their probe.

On that same day, opposition parties are planning to sponsor a motion for presidential impeachment, and a vote could come as early as Friday. If lawmakers do vote by the end of this week, and over two-thirds of the 300-seat National Assembly approve of an impeachment, Park will immediately lose all authority and be forced to hand power to the prime minister until a final verdict is rendered by the Constitutional Court.

Kim Moo-sung, former chairman of the Saenuri Party, said in an interview with the JoongAng Ilbo on Friday that he is “without a doubt” positive that the impeachment vote will earn two-thirds of the votes in the National Assembly.

The statement was made two days after the senior lawmaker said he will start an initiative within the Saenuri Party to impeach Park.

There seems to be well over 40 members in the party that currently approve the move, Kim said.

“The lingering atmosphere is that impeachment has become inevitable,” he said.

“The conservative ruling Saenuri Party has been inflicted with such a large, irreparable pain,” Kim said, adding that it would lose in the next presidential election if it fails to completely overhaul itself right now.

Former lawmakers from different parties convened Sunday at the Lotte Hotel Seoul and concluded that Park should step down by April 2017 in an orderly fashion, a bipartisan cabinet should be formed, and the legislature must appoint a new prime minister.