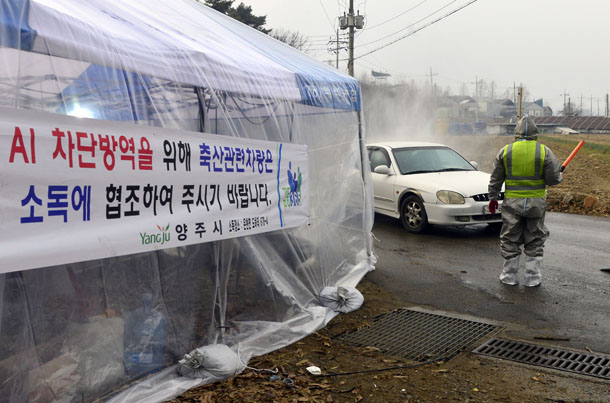 Health authorities sterilize a car near a poultry farm in Yangju, Gyeonggi, on Sunday, as the H5N6 strain of aviation influenza continues to spread through the country rapidly. Yangju is only 35 kilometers (21.7 miles) from Seoul. [NEWSIS]

Local health authorities confirmed Korea’s first outbreak of the H5N6 avian influenza virus in rural areas last week. That strain of the virus was discovered on Oct. 28 in the feces of migratory birds in Cheonan, South Chungcheong.

The flu spread quickly to reach Yangju, Gyeonggi, only 35 kilometers (21.7 miles) from the capital. Authorities confirmed on Tuesday that 240 out of 133,392 chickens that died on a farm in Yangju were infected with H5N6 avian influenza.

Despite a nationwide freeze on movements of poultry farmers and their vehicles within a 10-kilometer radius of sites where the virus has tested positive, the influenza continues to spread.

A farm in Icheon, Gyeonggi, reported to authorities Sunday that some 400 of its chickens died. Preliminary tests revealed that the chickens were infected with H5N6 avian influenza. More farms in Yangju and Sejong reported the abrupt deaths of hundreds of their chickens.

In response to the rapid spread, the Gyeonggi provincial government announced Sunday that it will issue a movement ban for two weeks on poultry farmers in Gyeonggi, and will ban the farmers from shipping eggs and fowl. The ban goes into affect from today.

The provincial government will provide from today free influenza vaccine shots to poultry farmers, the first time that a local government is providing free vaccination against bird flu.

The Animal Health Management Division of the Ministry of Agriculture, Food and Rural Affairs announced Wednesday that there is a very low chance that the virus can spread to humans, as it did in China, where 15 people were infected and nine have died since 2014.

The North Jeolla provincial government is running 17 sterilization centers and plans to extend their number. It also placed a movement ban on some 4.2 million fowls in 410 farms.

The North Gyeongsang provincial government on Saturday culled some 7,500 baby ducks as a precautionary measure after a strain of the virus was found on a farm that the ducks stopped at in a truck.

The Incheon Grand Park announced Sunday that its children’s zoo will be closed from today until the flu subsides. There are currently 262 animals of 37 types at the zoo, among which 135 are birds. Other facilities will remain open, the park said.