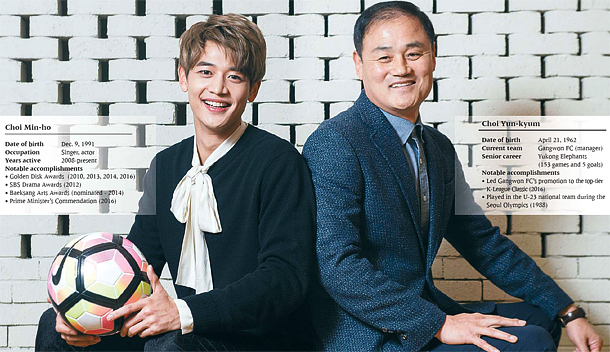 When Gangwon FC of the second-tier K-League Challenge took down the winningest club in the top-tier K-League Classic, Seongnam FC, to earn its promotion to the top league, Choi Yun-kyum, the team’s coach, was ecstatic.

The skipper had been waiting for this moment for the past four years. But more elated than the manager himself about the promotion was his son Choi Min-ho, better known by the public as singer-turned-actor Minho of K-pop boy group SHINee.

When the JoongAng Ilbo met the Chois before the premiere of Minho’s latest movie “Derailed,” the first thing the actor said was how excited he was about his father’s team being promoted to the Classic. He compared it to the first time SHINee topped local music charts.

“It was worth going all the way down to Busan [where Gangwon played the first round of playoffs] to watch my dad’s team play,” Minho said.

“Minho came to the stadium more than 20 times this season despite his busy schedule,” the skipper of Gangwon added. “He came all the way to Chuncheon, Gangneung and Wonju [all located in Gangwon, more than 40 miles north of Seoul]. He was like my lucky charm because the matches he attended, we actually won many of them.”

Choi Yun-kyum, a 54-year-old Daejeon native, is a former footballer himself, having played as a defender back in the days for the Yukong Elephants, the predecessor of Jeju United FC in the K-League Classic, as well as for the Korean national team. He even made an appearance in the 1988 Seoul Olympics, playing for the U-23 team as a wild card.

And like his father, Minho is considered to have one of the best football skills among Korean celebrities. On the television show “Our Neighborhood Arts and Physical Education,” which features celebrities playing various sports, Minho scored two goals against the old boys of FC Seoul.

Choi Tae-uk, a retired winger who played for various Classic elites including FC Seoul, Jeonbuk Hyundai Motors and Ulsan Hyundai FC, can attest to Minho’s football skills. He was one of the FC Seoul veterans who failed to catch the actor’s two shots.

“I wanted to become a professional football player like my dad,” Minho said. “But when I was a fifth grader, he told me he would kick me out of the house if I pursue that dream. That was the first time he disapproved of something I did so I decided to give up the dream.”

“Frankly, I didn’t want him to follow my path,” Coach Choi said. “Back when I was playing, it was difficult to make it in that world, very abusive back in those days. I would stay home for a couple of hours and then be off to training camp. It pained me to see my son asking me to stay over for the night.

“And from the football manager’s point of view, I didn’t think Minho had it in him to make it in that world,” he added. “He is strong-willed, but he had a small frame.”

So instead of representing Korea on the football pitch, Minho went down the path of representing the country on the stage. As a global entertainer, he has four Golden Disk Awards for achievements in the Korean music industry as well as a commendation from the nation’s prime minister.

But when it comes to love for the sport, Minho is second to none. Back in 2012, he was spotted attending a Queens Park Rangers match in London to watch Park Ji-sung play before retirement. “I am an Arsenal fan,” Minho said. “It’s fun when Dad and I watch a game together because he uses football nomenclature like stopper. I tell him these days that they say center back more than stopper.”

Before the season earlier this year, Choi Yun-kyum promised that if Gangwon were promoted to the Classic, he would have SHINee perform a concert. The manager admitted that it was out of impulse. “I didn’t know just how busy my son was,” he conceded.

But Minho said if the schedule allows, and if his fellow members are up for it, he would love to host a concert for his dad.

And one day, just like his father, Minho says he wants to be part of a football club in Korea. “Maybe not as an owner, but at least as an executive,” he said. “But I will always be my dad’s biggest fan.”