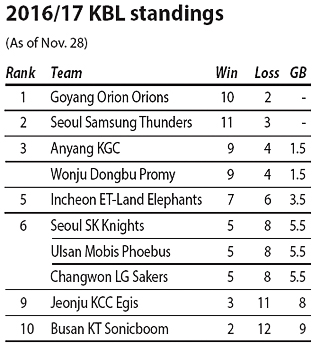 It’s back to rehab for the KCC Egis’ Andre Emmett

After spending a month in rehab, Andre Emmett of the Jeonju KCC Egis was looking forward to getting back on the basketball court. But his return was cut short after just one game, when he was sidelined once more by the same injury that forced him to the bench one month prior.

Emmett, who led the Egis to the regular season title last year, was re-signed to the North Jeolla-based team for the 2016-17 season. As an offensive talent who averaged 33.75 points during the playoffs and 25.67 points during the championship series, the team was looking to Emmett to help replicate its success.

Their hopes were dashed after just two games in October, when the American guard was forced off the court due to a groin injury. He spent one month recuperating and returned on Thursday, right as the Egis were looking for someone to help turn things around for them. The team had tallied two wins and 10 losses before that night, and Emmett’s presence seemed to be a saving grace.

But alas, it was not meant to be. Playing for 22 minutes, Emmett scored 19 points and grabbed three rebounds against the Changwon LG Sakers that night. Even considering the fact that he was freshly back in the game and needed some time to adjust, this was not the Emmett that fans remembered. His explosive drives to the basket were nowhere to be found, and he looked as if he was in pain the whole time.

And in pain he was. Medics discovered after the match that the ailment in his groin had returned, putting him out for another six weeks.

The good news is that even without Emmett, the Egis managed to cut their skid, taking down the Busan KT Sonicboom 107-85 on Saturday. It remains to be seen whether the Egis will be able to continue putting up as decent a performance as they did Saturday night, especially without their American star. 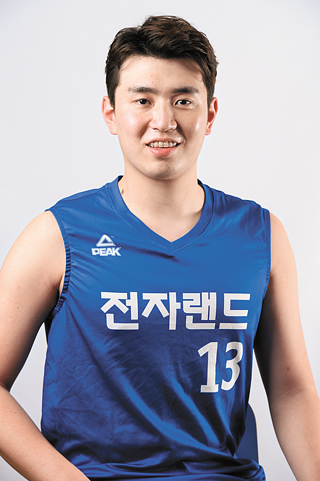 This year’s Korean Basketball League rookie draft was deemed one of the best ever, not least because of the impressive performance put on by the so-called Super Rookie Trio comprising Choi Jun-yong of Yonsei University and Lee Jong-hyun and Kang Sang-jae of Korea University. The three were called the “Golden Generation” of Korean basketball, and their professional debut was widely anticipated to reshape the landscape of the sport in the country.

Although Lee, who joined the Ulsan Mobis Phoebus, has yet to show much performance due to a foot injury, Kang and Choi have done more than enough to prove they were not overhyped. Choi, a 2-meter (6-foot-7) forward for the Seoul SK Knights, is leading the league among Korean players in rebounds, grabbing 9.08 balls off the rim. He’s been averaging 9.62 points per game, placing him at 18th in scoring among Koreans.

Choi’s old collegiate rival Kang has put up less impressive numbers, but he has played in every game but one so far for his team, the Incheon ET-Land Elephants. In his 12 games, he has scored 5.8 points per match and also grabbed 3.4 rebounds on average.

The Elephants’ head coach, Yoo Do-hoon, has praised Kang’s mentality. Although many Korean rookies can get intimidated playing against their seniors, Kang has maintained a solid presence. “Mentally, Kang is strong and even brazen in some cases,” Coach Yoon said. “Even when he misses a shot, he doesn’t bring himself down. He still goes at it repeatedly.”