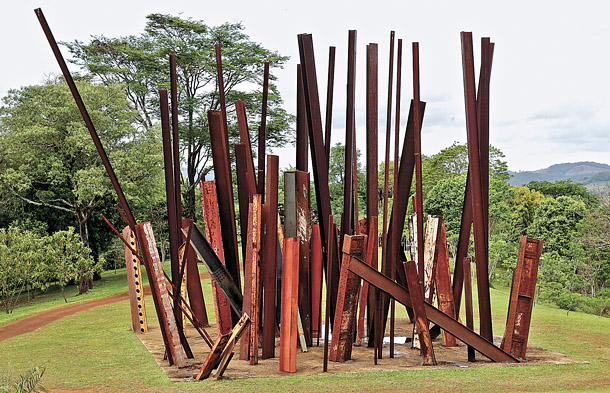 An art installation by U.S. artist Chris Burden at the Inhotim Institute, on view in Brumadinho, Brazil. [AP/NEWSIS]

BRUMADINHO, Brazil - Smack in the middle of lush eucalyptus forests in Brazil’s heartland, Inhotim Park offers visitors a mix of sensations rarely combined into one experience: art and nature.

The park is so sprawling that many people take golf carts from one installation to the next - and even such rides take at least five minutes.

“Speed is the enemy of good taste and perfection,” said mining tycoon and park founder Bernardo Paz in a recent interview. “The beauty here is more or less the ideal of happiness.”

Inhotim (pronounced in-yo-tcheem) has become one of the most important art centers in Latin America since opening 10 years ago. It has reached international acclaim thanks to the mix of nature and exhibitions of globally known artists like Chris Burden, Adriana Varejao and Cildo Meireles.

Some of the most popular displays include a suspended bronze tree made by Italian Giuseppe Penone and a pavilion where visitors can hear sounds of the earth from 200 meters (219 yards) down via microphones, a work created by American Doug Aitken. There is also a braid-shaped piece by Tunga that was the first work by a contemporary Brazilian artist shown at the Louvre museum in Paris.

“This is a very special place. I was here before and this time I brought my girlfriend,” said Humberto Nogueira, 25, who works in advertising in Sao Paulo. “Everyone should come.”

Two million people have visited the park. But despite its popularity, park administrators worry about sustainability going forward.

Brazil, Latin America’s largest economy, is mired in its worst recession in decades, which means Brazilians have less money to travel - even in their own country. The park’s off-the-beaten-track location, 414 miles (667 kilometers) north of Rio de Janeiro, cuts both ways: the remoteness makes it both attractive and relatively hard to get to. And the upkeep of the park, which includes 1,000 staff members, is expensive (park authorities declined to say how much).

Looking for new sources of revenue, the park has begun experimenting with renting itself out. The first glimpse of that came this month, when Inhotim opened a space for indie culture festival MECA and allowed hundreds of people to spend the night in their tents. The event included Grammy winner Caetano Veloso.

A luxury hotel is also being built in the park. There are just a few hotels in the nearest city, Brumadinho. Many visitors prefer to stay in Belo Horizonte, Brazil’s sixth largest city, 37 miles away.

There are also plans to build a theater, an amphitheater and a new pavilion. Also proposed: standalone lofts so visitors can stay overnight.

Antonio Grassi, the executive director, says they also want to host debates and facilitate innovative art projects. But making changes “has been a very tough fight,” he said. “Our capacity to draw sponsorship of private companies has been affected during this crisis. Our challenge is to keep looking for alternatives." AP