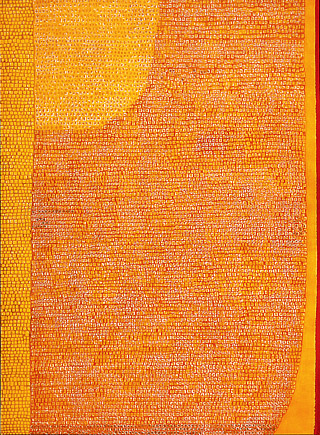 The sale marks the fourth time in the past 14 months that the modern art icon has broken records. Now, the five most expensive pieces of Korean art ever auctioned are all abstract paintings by Kim, the so-called dot paintings he made in New York from 1963 to 1974.

“The record setting had been anticipated because the work is a dot painting created in the period regarded as the peak of Kim’s oeuvre, and Kim’s yellow dot painting is very rare,” said So Jin-su, an art market expert and professor at Kangnam University in Yongin, Gyeonggi.

Like Kim’s other dot paintings, “12-V-70 #172” is large in scale at 93 by 68 inches and is filled with tens of thousands of round dots surrounded by layers of square borders that spread across and smoothly permeate the cotton. The big canvas and rhythmical repetition of the dots give a sense of infinity and sublime.

Most of Kim’s dot paintings have tones of blue, his signature color, and give an impression of a night sky filled with stars, but “12-V-70 #172,” with its yellow and orange tones, give the impression of the sun spreading its light, warmth and energy.

“The price of Kim’s work has surged in recent years, as buyers of Korean art have expanded from Koreans to foreigners in earnest amid the global boom of dansaekhwa [Korean monochrome paintings],” So said. “Now, art collectors, free from national borders, get information on artists in various parts of the world via the internet. They tend to focus on each region’s major artists.”

Kim has been regarded as one of Korea’s most important modern artists. In June, the KimDaljin Art Archives and Museum announced that Kim has topped the list of “Representative Korean Abstract Artists” based on a poll of 20 art critics, historians and curators. Experts say his dot paintings, considered the first generation of Korean abstract art, inspired dansaekhwa artists in the second generation.

The “Umber-Blue” series by Yun, who was Kim’s son-in-law, saddles the border between East Asian ink paintings and Western oil paintings with its limited colors and a strong meditative ambience.

Works from the populist Minjung art movement of the 1980s and early ’90s also got attention from collectors. The movement is represented by realist paintings with strong political and social messages protesting the Korean military regime of the ’80s. Among them, a painting by Hwang Jai-hyung fetched 600,000 Hong Kong dollars, triple the lower limit of its estimate.

Seoul Auction said the hammer fell for 83 pieces, or 69 percent, of the 120 put up for Sunday’s sale.