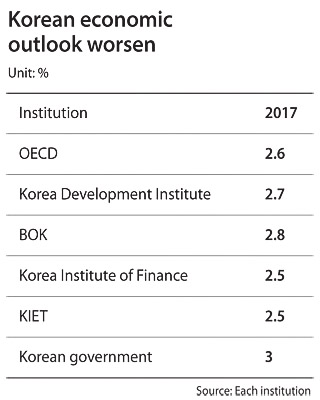 With the continuing crisis of governance - and despite an 11 trillion won ($9.4 billion) supplementary budget spent in the second half - estimates for the growth of Korea’s economy continue to be whittled down.

The Organization of Economic Cooperation and Development (OECD) Monday released an outlook that lowered Korea’s outlook for next year by 0.4 percentage points to 2.6 percent.

In June, the OECD projected Korea’s growth for 2017 to be 3 percent.

It kept this year’s growth the same at 2.7 percent.

If it’s correct, Korea’s economy will suffer economic growth of below 3 percent for the third consecutive years. This contrasts with the Park Geun-hye government’s goal of 4 percent or higher growth pushed by creative economic policies announced in 2014 under a three-year economic plan.

The OECD recognized various government actions including the Bank of Korea’s interest rate cuts and the government supplementary budget as well as deregulation in boosting the housing market as contributors to invigorating the economy.

“Government policies continue to support the expansion,” the report said. “For the third time in four years, the government introduced in 2016 a supplementary budget, amounting to 0.6 percent of GDP. The relaxation of regulations on mortgage lending in 2013-2014, combined with low interest rates, boosted residential investment growth to a 25 percent annual rate in the first three quarters of 2016, accounting for nearly half of the gains in real GDP.”

The report, however, noted that the economy could face challenges as additional fiscal stimulus spending will be limited.

Moody’s and the Korea Institute for Industrial Economics and Trade (KIET) on Monday released similar outlooks for next year’s growth at 2.5 percent, while they expect this year’s growth to be 2.7 percent.

KIET said even a 2.5 percent outlook would be considered a success considering the unfavorable conditions such as the domestic political turmoil and the uncertainties surrounding Donald Trump becoming U.S. president.

“We didn’t include the possible changes that follow with the Trump administration and the [Choi Soon-sil] political scandal as we aren’t sure how big an impact they will have [on the local economy],” said Yu Byoung-gyu, KIET president. “One could say 2.5 percent would be a success next year.”

“Concerns over a slowing economy and smaller incomes have been growing,” KIET president Yu said. “Falling consumer confidence and worries over corporate restructuring are taking a toll on domestic consumption.”

A study by the Bank of Korea released last week showed consumer confidence has fallen to its lowest level since 2009, when markets were hit by the global financial meltdown.

The BOK said the composite consumer sentiment index fell 6.1 points from the previous month to 95.8 in November. The figure fell to the lowest level since April 2009, when it was 94.2.

A reading below 100 indicates that a majority of consumers that participated in the survey are pessimistic about the economy.

The OECD recommended that the Korean government adopt expansionary macroeconomic policies while pushing structural reforms including in labor.

“Fiscal policy should be used more actively as a way of ensuring adequate aggregate demand. The fiscal position is strong and increased spending on priority areas, including investment to boost productivity and social spending, would be welcome,” the report said.

“An improved fiscal framework is priority to allow greater flexibility to help Korea break out of its low-growth trap while keeping public debt low over the long term.”