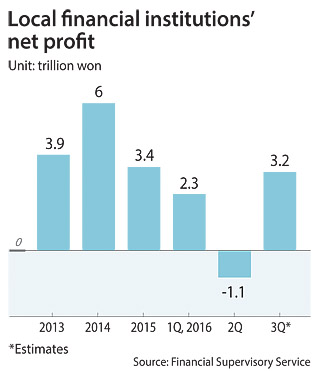 Korea’s financial institutions saw their net profits grow to their highest levels in four a half years in the third quarter of this year after they reduced costs and benefitted from changes in exchange rate.

According to preliminary performance data released Monday by the Financial Supervisory Service (FSS), local banks’ net profits from July through September rose 146 percent year-on-year from 1.3 trillion won ($1.11 billion) in the third quarter of last year to 3.2 trillion won this year.

This is the best performance for a quarter since the first quarter of 2012, when profits hit 3.3 trillion won. Financial institutions benefitted from a weakened currency and an increase in loans.

“Local financial institutions’ assets under management expanded by 90 trillion won compared to a year ago and this helped them to make more profit from interest,” said Min Byung-jin, an official at the FSS.

Banks’ net profits were in a slump due to low interest rates and lending to troubled companies in the shipping and shipbuilding industries. They faced a net loss of 2.2 trillion won in the fourth quarter of last year and recorded 1.1 trillion won worth of losses in the second quarter of this year.

One of the other reasons for the rebound in the third quarter was a reduction in the size of bad debt reserves by 89.2 percent year on year from 2 trillion won to 0.2 trillion won this year.

Banks also managed to cut down distribution and management costs, including labor costs. The FSS said they reduced such expenditures by 3.6 percent year on year, or 0.2 trillion won, from 5.3 trillion won to 5.1 trillion won in the third quarter.

“We will continue to monitor the financial stability of the local banks by focusing on funding given to weak industries such as shipbuilding,” said Min at the FSS.

The industry-wide ROA was 0.57 percent, more than double the 0.24 percent recorded in the third quarter of last year, and the ROE rose from 3.17 percent to 7.71 percent in the same period.

The financial regulator, however, also expressed concerns that their ROA and ROE during the first nine months of the year remained below the past 10 year’s average figure and those of other developed countries.

The ROA in the first nine months of the year was 0.21 percent and the figure for ROE was 2.90 percent, which are lower than the average figure for the past 10 years. The 10 year average for ROA was 0.50 percent and that of ROE was 6.69 percent.

The ROA for commercial banks in the U.S. was 1.04 last year and the figure for ROE was 9.26 percent.