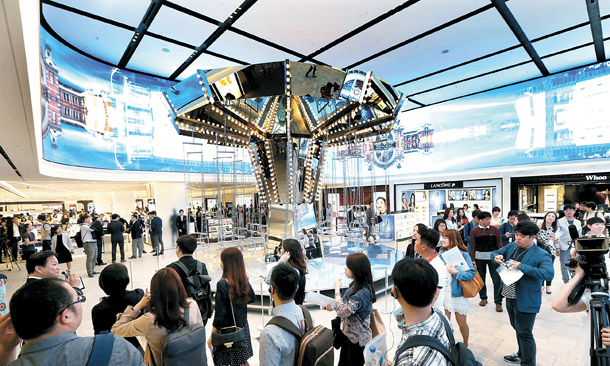 During the Joseon Dynasty (1392-1910), commercial shops were operated in certain areas inside city walls. Merchants who ran the shops needed what would be called government licenses today. They kept ties with the government and suppressed unlicensed merchants doing business in the city. As competition was curbed, the quality of products fell, which hindered Korea’s commercial development overall.

A similar pattern has played out in 21st century Korea in the duty-free business. In order to operate a duty-free shop in the country, a company is obliged to receive or renew a license from the government customs office. Details about when and how licenses will be given out change when governments change. Recently, such changes have been unusually frequent.

Korea ranks No. 1 in sales in the global duty-free market. But that is largely due to the inflow of tourists from China and their love of duty-free goods. Critics say a decline of Korea’s duty-free industry is inevitable if it continues to be managed by government fiat. The licensing system discourages market competition and the selection process for the lucky companies that get the licenses completely lacks transparency, making it susceptible to political interference.

“The downside of the system is that it weakens competition in the market, as only a few permitted companies do business, not to mention the rumors spurred about the selection process itself,” said Choi June-sun, a professor of law at Sungkyunkwan University Law School. “The licenses should be replaced by a declaration or registration system to encourage market competition.” In other words, a new system is needed to lower the entry barriers and open doors to companies that fulfill a fixed set of standards.

Criticisms of the current licensing system are gaining strength after prosecutors raided the headquarters of Lotte, SK, the Ministry of Strategy and Finance as well as the Korea Customs Service (KCS) on Thursday. They are investigating whether the Blue House put pressure on Customs to award duty-free licenses to Lotte and SK after they made politically motivated donations.

Lotte was asked to donate 7.5 billion won ($6.41 million) and SK 8 billion won to the K-Sports Foundation, which is allegedly controlled by Choi Soon-sil, the presidential friend at the center of a mushrooming abuse of power scandal threatening the Park Geun-hye government. Prosecutors suspect the money was requested in return for the government’s granting of duty-free licenses. Those licenses will be announced by the end of this year.

Both SK and Lotte had to close down their 20-year old duty-free businesses in Walkerhill Hotel and the Lotte World Tower last November when renewal of their licenses was denied by Customs.

Current laws oblige duty-free shops to renew licenses in every five years. The period was ten years before 2013 when the National Assembly cut it in half. Lotte and SK were the first to lose licenses after the law changed. It was never entirely clear why the renewals were denied.

In October, they submitted bids after the government announced it would give out licenses to three more major companies - making each of them more vulnerable to requests from the government.

Last year’s process was criticized as “shadowy” - the customs office refused to unveil the names of judges or the score cards that the final decision was based upon. As a response, the government once again tried to reform the laws in March to extend the license period back to ten years. The rewriting of the laws would also allow companies to continue in the business if there is no specific reason for disqualification. The revised law is pending at the National Assembly.

Meanwhile, industry insiders say that such measures are not fundamental. Their opinion is that government regulation will weaken the competitiveness of Korea’s duty-free industry against foreign countries who are also expanding investment in the sector. In September 2014, the state-owned China Duty Free Group opened a store in Hainan Island which is threefold in size compared to Lotte’s duty-free shop in Sogong-dong. In Singapore and Hong Kong, anyone can open a duty-free shop once they pass certain requirements.

Lee Jung-hee, professor of economics at Chung-Ang University, refers to Japan as a model example. “Shinzo Abe’s ministry reformed the duty-free system so that foreigners who purchase products in Japan can have their tax repaid on the spot instead of having them returned all at once in the airport,” he said. Japan’s original policy on duty-free operations in the past was focused on those operating in airports.

However, last year, it eased regulations to allow duty-free operations in cities as well, including in Tokyo’s Ginza area.