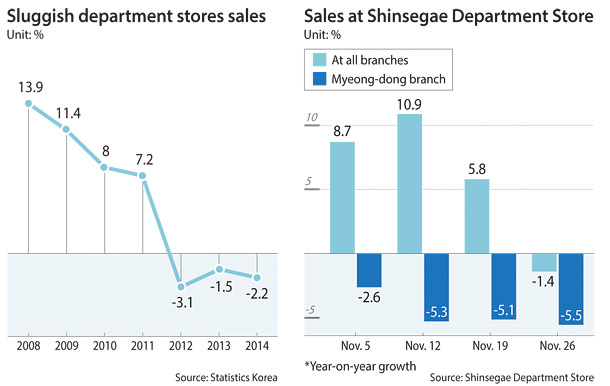 Department stores sales, which were already sluggish, are taking a hit again due to the recent political turmoil in Korea and record-low consumer sentiment.

“The antigovernment protest seemed to have taken a toll on our sales performance,” said a Shinsegae Department Store spokesman.

“We were seeing some recovery in the first few weeks this month through renewal [of the Gangnam branch]. The Myeong-dong branch seems to have been hit the hardest by the protest,” he added.

Shinsegae’s Myeong-dong branch has been posting losses every weekend for the last month, starting with a 2.6 percent fall in sales the first Saturday of November, followed by 5.3 percent and 5.1 percent decline in the following weeks.

Industry insiders say the timing of this political chaos couldn’t be worse. The year-end season is critical for department stores and other retailers to take advantage of holiday shopping.

In the off-season winter sales, which mostly kicked off in the third weekend of November at major department stores, discounts were as high as 80 percent, but retailers said they didn’t benefit as much as they had expected. A synergy effect from Black Friday in the U.S. last weekend also was expected, but that couldn’t compensate for the consumer sentiment either.

The consumer sentiment index (CCSI) fell to the lowest level in November since the global financial crisis in 2009, the Bank of Korea said Friday. The indicator of how much the public is willing to open up their wallets stood at a mere 95.8, down 6.1 points from the previous month. The authority said growing uncertainties in and outside of Korea related to the Choi Soon-sil scandal and the election of Donald J. Trump as the U.S. president brought down the index.

The performance of department stores in Korea has been showing a continuous downfall in the past few years due to increasing e-commerce platforms and diversifying offline channels such as flagship stores that don’t have to rely on big retail platforms.

Sales at department stores have been declining since 2012, the government said. They fell 3.1 percent year-on-year in 2012, followed by 1.5 percent and 2.2 percent drops the next years.

Hyundai, Lotte and Shinsegae Department Stores have laid out ambitious short- and long-term plans to bounce back from the prolonged slump, but that is hardly likely to happen this year.

Hyundai has found a solution in strengthening its fashion and home furnishings businesses. After seeing satisfying profit last year from the acquisition of fashion group Handsome which includes womenswear such as SJSJ and TIME, it is considering acquiring the fashion business affiliated with SK Networks, according to a regulatory filing last month. Hyundai also is vying to lure in more visitors by opening home furnishings stores inside its branches known to most effectively lure in passersby. It is in the process of exclusively importing U.S. brand Williams-Sonoma and has opened a Flying Tiger Copenhagen store at its Pangyo branch.

Shinsegae Department Store, on the other hand, is focusing on infusing entertainment into its platforms to make visitors stay longer, which it hopes will lead to additional purchases. Following Starfield Hanam, which has a water park and recreational gym inside, Shinsegae said it will build an aquarium and outdoor park on the top floor of its soon-to-open Daegu branch.