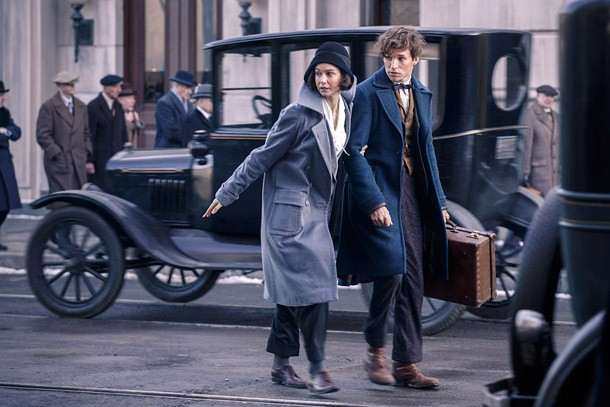 J.K. Rowling’s fantasy-adventure “Fantastic Beasts and Where to Find Them” ruled the local box office for the second consecutive weekend. [WARNER BROS. KOREA]

The newest extension of the Harry Potter world, “Fantastic Beasts and Where to Find Them,” topped the local box office again in its second weekend.

Penned by the renowned novelist J.K. Rowling, the magical fantasy-adventure sold 341,000 tickets at 1,147 theaters, accounting for 44 percent of the nation’s entire ticket sales. According to the Korean Film Council on Monday, the movie raked in 3 billion won ($2.69 million) from Friday to Sunday, adding to the total 29.1 billion won it has earned since Nov. 16 release.

The second spot went to a local comedy, “My Annoying Brother,” which sold close to 322,000 tickets in its first weekend. Directed by Kwon Soo-kyung and starring actors Cho Jung-seok and Do Kyung-soo from Exo, one of the nation’s most well-received male K-pop acts, the family-comedy about a fallen national judo player (Do) and his fraudulent stepbrother (Cho) earned 2.65 billion won over the last three days. Despite the cliche-filled scenes and heart-wrenching storyline, the movie ranked first at the local box office on Nov. 23, the day it dropped.

Marvel Studio’s “Doctor Strange” maintained the third spot from last weekend with 40,700 tickets sold. Despite hitting theaters a month ago, the hero fantasy-adventure earned 337 million won this weekend, for a total of 46.9 billion won in ticket sales.

“The Little Medic: Secret Mission of the Bodynauts” debuted at the fourth spot. Aimed at kids, the German animated film sold 16,000 tickets over the last three days.

A local fantasy-romance, “Vanishing Time: A Boy Who Returned,” about the innocent love between two elementary-age students, slipped to fifth from last weekend’s second in its second weekend. Despite featuring A-list actor Gang Dong-won, whose hits include “A Violent Prosecutor” (2016) and “The Priests” (2015), the fantasy-romance was only able to sell 15,500 tickets.

The bowling gambling film “Split” came next, which was followed by the horror movie “Blair Witch.”

The documentary “Moo-hyun, the Story of Two Cities” rounded out the top 10.