Gov’t carries on with its own textbooks

Gov’t carries on with its own textbooks 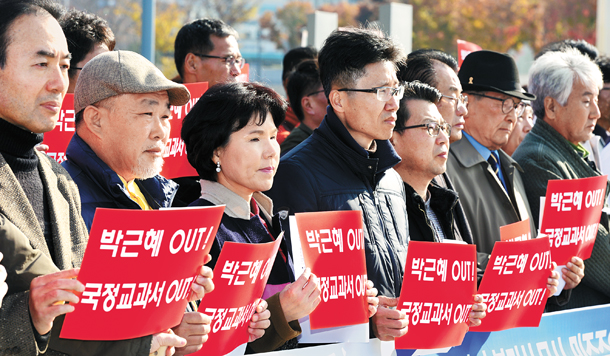 Members of a coalition of 90 civic organizations in Gwangju and South Jeolla hold a press conference Monday at the May 18 Democracy Square in Gwangju to urge the government to abolish the state-authored history textbooks and to demand President Park Geun-hye resign. [NEWSIS]

Draft versions of state-authored history textbooks for Korean middle and high school students were revealed Monday, defying speculation that the Ministry of Education would delay or cancel the plan to use them amid mounting criticism of the Park Geun-hye administration for an abuse of power scandal.

Liberal historians welcomed the description of former President Park Chung Hee, the late father of the current, embattled president, as a dictator who, in the name of national security, “strengthened presidential authority through a dictatorial regime.”

The Treaty on Basic Relations between the Republic of Korea and Japan, which he signed in 1965 to establish diplomatic ties with Tokyo, was intended to boost national economic growth, according to the textbook, but failed to include Japan’s remorse for wrongdoings by its colonial forces from 1910 to 1945.

Liberals were in dismay, however, that the high school textbook spent four pages describing the former president’s positive achievements, while allotting only half a page for the negatives that accompanied them. 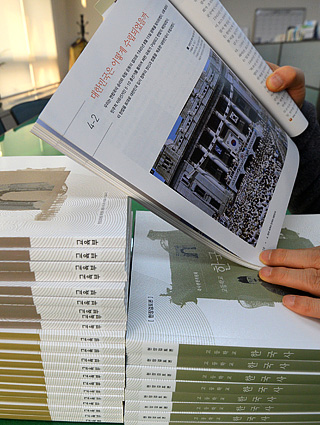 An official from the Education Ministry unveils draft versions of the state-authored history textbooks. [NEWSIS]

Among President Park Chung Hee’s achievements recorded in the textbook were the construction of the Gyeongbu Expressway and the Saemaul (New Village) Movement. The negatives included environmental pollution and poor working conditions for blue-collar workers.

His daughter, President Park Geun-hye, was described briefly, mostly by highlighting her national slogans like a “New Era of Hope and Happiness.”

As to the nation’s founding history, the textbook reads that the Republic of Korea was formally established on August 15, 1948, “upon receiving the mantle of the former provisional government.” It was three years after Japan ended its 35 years of colonialism rule over the Korean Peninsula.

The passage unnerved liberal scholars who see 1919 as the official founding of the Republic of Korea, when a provisional government was founded in Shanghai by independence activists.

A coalition of 485 civic organizations that are against state-authored history textbooks issued a statement Monday urging the government to “immediately abolish” the educational materials, saying that the Education Ministry has been “played around” by ultra-conservatives who glorify former President Syngman Rhee and see him as the “father of the founding nation.”

Rhee became the first president of the Republic of Korea on July 24, 1948, but was forced to resign in April 1960 after activists and student groups took to the streets in opposition to his growing authoritarian ways.

Provocations from North Korea were detailed far more than in the previous history textbooks, from the fatal shooting of a South Korean tourist at the Mount Kumgang tourist resort in July 2008 to the shelling of Yeonpyeong Island in 2011.

Lee Joon-sik, education minister and deputy prime minister for social affairs, showed reporters the three history textbooks - two for middle school and one for high school - during a press conference in central Seoul, and said he “earnestly entreats” the public to show interest in the publications.

The ministry, said Lee, “put a lot of effort” into the process so that Korean students can cultivate a “a proper view of the state and a balanced historical understanding.”

The final versions will be released in late January 2017 and distributed to middle and high school students across the nation in March 2017.

Unveiled for the first time Monday was the complete list of people involved in writing the new textbooks. Authorities had kept it a secret out of fear that participating scholars might face a public backlash. There were several people who actually planned to join but dropped out after being condemned by students or fellow scholars and teachers.

A total of 31 people were enlisted for the writing staff for the middle school textbooks, 27 of which also worked on the high school textbook. Seven are currently working at middle or high schools, while the rest are professors or researchers.

There were several retired professors in their 70s. A historian who has knowledge of the recruiting process said on the condition of anonymity that authorities chose retirees on purpose so that the public couldn’t “attack them” if they found anything controversial in the textbooks.

Young scholars refused to take part in the project, the source continued. The plan to re-introduce state-controlled history textbooks in Korea has been debated for years until the Education Ministry finally announced in October 2015 that it would go ahead with it.

History textbooks authored by the government were initially introduced in 1974 under the military rule of Park Chung Hee and lasted until 2010. The current system, in which schools choose from a range of textbooks approved by the ministry, will only have lasted for seven years once the state-published materials are distributed next spring.

When the education minister announced plans last year, he stressed that it was an “unavoidable choice” for the government to correct all errors about historical facts and “end the controversy” over ideological biases in current history textbooks.

That controversy stood out in 2013, when the ministry demanded all eight publishers of middle and high school history textbooks make a total of 829 revisions. Only one textbook that was known for its conservative, right-wing stance agreed to follow suit, while the rest, which were on the opposite spectrum of political views, refused.

The fiasco seemed to end a month later when all seven publishers revised the texts. But soon after, the education ministry said it would prevent any similar cases by overhauling the textbook authentication system.

The ruling Saenuri Party, to which President Park belongs, agreed.