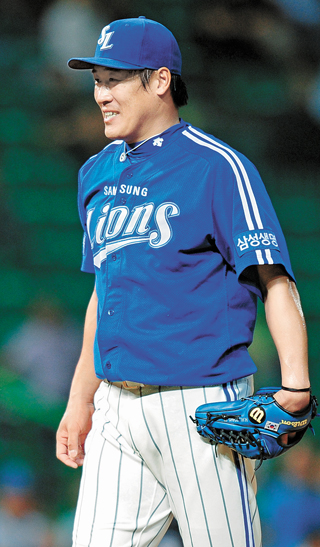 Jong Hyun-wook, a pitcher for the LG Twins who battled stomach cancer to return to the mound, has hung up his gloves. The 37-year-old Gyeongsang native is returning to his old stomping grounds in Daegu to start the second chapter of his baseball career as a coach for the Samsung Lions.

Jong started his career in the Korea Baseball Organization in 1996 as a Lion and debuted on the roster in 1998. He tossed in five games and clinched one win during his first season.

A rising career came to a sudden halt in 2014 when Jong was diagnosed with stomach cancer. For a reliever who was nicknamed “Slave Jong,” a testament to his work ethic and near injury-less career, it was a coup de foudre.

But the persistent pitcher lived up to his nickname, overcame the cancer and eventually returned to the mound this year. Jong pitched in 17 games for the Twins, earning three saves along the way, a heartwarming human story during a tumultuous year in baseball marred by game-fixing scandals.

Jong leaves the field with 51 wins, 44 losses, 89 holds and 24 saves. After making the decision to retire from playing, his former team, the Lions, reached out to Jong right away to offer him a coaching position.

“It’s nice to be back,” he said. “I left the team after 15 years. Even when I was away, I kept in touch with many of the coaching staff and players.”

Many fans felt his retirement was out of the blue, but Jong refuted such suggestions, saying it was something he had been considering for a while. “I don’t think I can compete with the younger players anymore, so I told myself that it was time to go,” Jong explained.

“Honestly, it’s sad to think that I am calling it quits, but what good will come out of me sticking around for one more year?” he added. “My regret is that I was unable to tally 100 holds. Among anything else, I would like to offer my apologies to Twins fans. I know they expected a lot from me when they called me in as a free agent. The Twins are a great team and their fans more passionate than any others. It’s my deepest regret for failing to meet their expectations.”

Even though he had just battled cancer, Jong appeared relaxed, and he said it was exactly the mind-set he had throughout the season. “I think health takes precedence over anything else,” he said. “And a lot of people said they were touched by what I have done. Frankly, I thought to myself whether I would be able to play ball again after the surgery, but I pulled it off.”

With his health adversities behind him, Jong said he would focus on his new job as a coach for his old team. “I met so many good coaches throughout my career, and they were all fair when it came to how they treated the players,” Jong said. “They considered work ethic the most invaluable asset of a player, and I think that’s what coaches should do, acknowledge players who work hard.”

When Jong joined the staff in the Lions dugout, he was greeted by many familiar faces who played alongside him. “Park Jin-man and Kang Bong-kyu, we’ve played together back in the days and stuck together,” Jong said. “Coach Kim Han-soo [the new manager of the Lions] is also my old teammate, so it will be nice to be around them once more.”