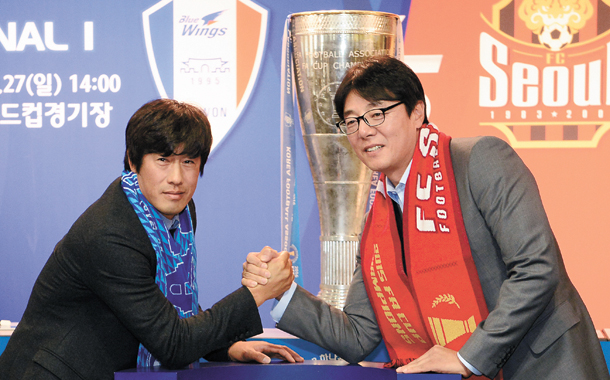 Suwon Samsung Bluewings manager Seo Jung-won, left, and FC Seoul manager Hwang Sun-hong during a prematch press conference for the FA Cup finals last Thursday. Suwon edged Seoul 2-1 during the opening match on Sunday and will try to take the trophy home this Saturday in the second-leg match against Seoul. [NEWSIS]

This year’s Korean FA Cup is a showdown between two archrivals in the top-tier K-League Classic: FC Seoul and the Suwon Samsung Bluewings.

Ever since the early 2000s, when FC Seoul was the LG Cheetah, based in Anyang, Gyeonggi, the league rivalry between the two clubs was considered a spectacle to watch in the Classic.

During the first-leg match of the FA Cup finals over the weekend, it was Suwon that claimed victory. Not only did Seoul, the winner of this year’s Classic season title, fail to beat Suwon, they were also in a predicament offensively with all three of their strikers either gone or injured, posing a serious threat to their quest for a double-crown title.

Suwon edged Seoul 2-1 on their home turf at Suwon World Cup Stadium in Gyeonggi on Sunday. The stadium was filled with fans despite the brisk wind and freezing rain. The contentious match lived up to its hype for the fans dressed in blue and red, the color of Suwon and Seoul respectively.

Before halftime, both teams had each scored a goal. Yeom Ki-hun, the captain of Suwon, scored the tiebreaker in the second half with a midrange shot to secure the win, providing the club an advantage when it goes into the second match which takes place this Saturday.

Seoul still has the potential to turn things around, but it’s not looking too good for skipper Hwang Sun-hong. Above all else, he’ll have to make do this Saturday in front of home fans with an incomplete set of his offensive trio Park Chu-yong, Carlos Adriano and Dejan Damjanovic.

Damjanovic, a Montenegrin forward who scored 154 goals in the K-League, 151 with Seoul, will be sitting out the next game after he was booked with a yellow card in the first match. This is an ominous signal for Seoul, which has been counting on Damjanovic’s experience in tough matches.

Seoul’s Brazilian forward Carlos, the leading scorer of the FA Cup and runner-up for the top scorer title in this year’s Classic, is not in peak condition. Carlos, whose knack for saving the team when in a pinch has been indispensable, entered the pitch in the second half of the match against Suwon but failed to capitalize several chances he encountered during his limited playing time.

Meanwhile, Park, a homegrown star and former Arsenal man, is also suffering from a minor injury that forced him out of the first match. The trio is nearly irreplaceable when it comes to their prowess up top.

Adding to Hwang’s distress, Joo Se-jong, a starting midfielder and playmaker for Seoul, also hurt his knee, which means he will likely sit out of Saturday’s match. Their goalie, Yoo Hyun, has also been suspended. During the match on Sunday, Yoo slapped Suwon’s Lee Jong-sung in the second half. The referees didn’t catch him in action, but the Korea Football Association decided to mete out penalties after a postgame video screening.

All in all, it seems no part of the team will be clicking when the next match comes around.

“I am not sure how I will form the offensive lineup for the second match,” Hwang said after losing to Suwon, clearly aggravated about the situation at hand.

Eventually, the FA Cup trophy will go to the team that wants it more, and in that regard, Seoul may be at a loss. The club has already won the Classic season trophy for this year, and their spot in next year’s Asian Champions League is guaranteed. For Suwon, the only way to get there is by winning the FA Cup. Mentally and tactically, the cards are in Suwon’s favor.

Still, Seoul skipper Hwang is known for his ability to salvage his team out of the deepest pits when everyone else says it’s impossible. Hwang toppled all expectations this year that the Jeonbuk Hyundai Motors would take the Classic title, and back in 2013, the resilient coach led the Pohang Steelers to take down Ulsan Hyundai FC, a feat no one expected was possible because Ulsan was deemed unsurmountable at the time. Not only that, the Steelers were trailing in the league by two points until the final match.

It’s no surprise, then, that Hwang is known for his catchphrase, “No one ever knows what’s going to happen in football until it’s over.”

“Everyone says the odds are against us,” said a staffer from FC Seoul. “But we’ve been here before. Everyone is pumped up about the second game. Park being out of the first game was in preparation for the second game. We will win this.”

Hwang shared the sentiment. “It isn’t over yet, and I don’t think we were completely outpaced by them in the first match.”

“It will be a good match,” he assured.