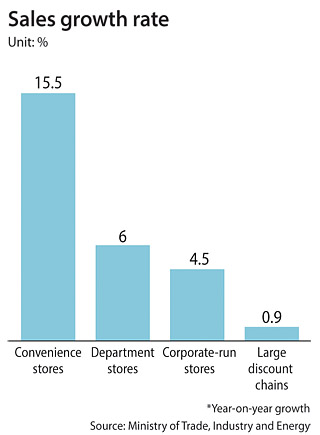 Korean retailers saw a sales jump last month compared to the previous year, largely thanks to the promotional event that the government dubbed the Korea Sale Festa.

Overall retail sales grew 8.4 percent, the Ministry of Trade, Industry and Energy said Tuesday. Growth slowed beginning in July, but rose compared to the previous month for the first time in October.

“Retail sales rose last month due to the Korea Sale Festa that attracted more foreign tourists to the country and as there was one more non-business day this year compared to last year,” said Chung Jong-young, a director at the Trade Ministry. Data showed that there were 7.3 percent more foreigners who visited this year during the grand sales event.

The stores also experienced a surge in sales of instant food products as the number of people living alone continues to grow.

“Sales of beer and pre-cooked foods rose significantly as more people are O.K. with eating and drinking alone,” said Chung.

Sales of processed food, which includes beer, rose 17.6 percent year on year and accounted for 44.5 percent of the total sales at convenience stores last month. Sales of instant foods also jumped 47.4 percent in the same period.

Department store sales rose 6 percent year on year as they offered more promotions throughout the grand sale. Sales at large discount chains, on the other hand, only managed to grow 0.9 percent compared to the previous year, as fewer people bought sports related products, the Trade Ministry said.

Sales of corporate-run supermarkets rose 4.5 percent in October compared to the previous year ahead of kimjang, Korea’s kimchi-making season. Sales of agricultural products rose 9.7 percent year on year and they accounted for 37.7 percent of the sector’s total sales.

According to the data, sales of fashion-related goods for online retailers jumped 69.7 percent and electronics sales rose 9.8 percent. The government cited the Korea Sale Festa as a factor in the sales growth.

The government based its data on sales at three large discount stores - Lotte, Hyundai and E-Mart - along with several convenience stores including CU and GS25.